‘Saddest Shutdown Photo Ever’ Brings Out The Skeptics

A small child standing at the gate of a shuttered zoo in a monkey costume has become the unofficial mascot of how 13 percent of the government being shut down absolutely fucking destroys dreams.

Not to make light of the government shutdown, because it does suck hard when people are doing their jobs in good faith without being paid thanks to our childish elected officials, but the photo you see above doesn’t really make me sad so much as it makes me laugh. A dark, bitter irony laugh, but a laugh nonetheless.

You can almost hear the child saying “Pwease, you mean ‘ol Repubwicans. Pwease let me see da animows!” In fact, I think we’ll be seeing that attack ad next election cycle. Mark my words, folks. No one knows how to kick and scream for no reason like the GOP, but no one uses children as political shields quite like the left.

Anyway, the photo is going viral on reddit thanks to some help from TIME Magazine’s Alex Fitzpatrick on Twitter.

Via @Reddit, the absolute saddest #shutdown photo you will see pic.twitter.com/6KhLdZeBOs

And before you snap on me in the comments for my cynicism, I’m not the only one a mite skeptical about this photo. When contacted by the media, superbonnie (the OP) said that the photo isn’t meant to send a political message, even though the post is titled “Please Open the Government.”

Here are some of the jaded responses to the photo on reddit: 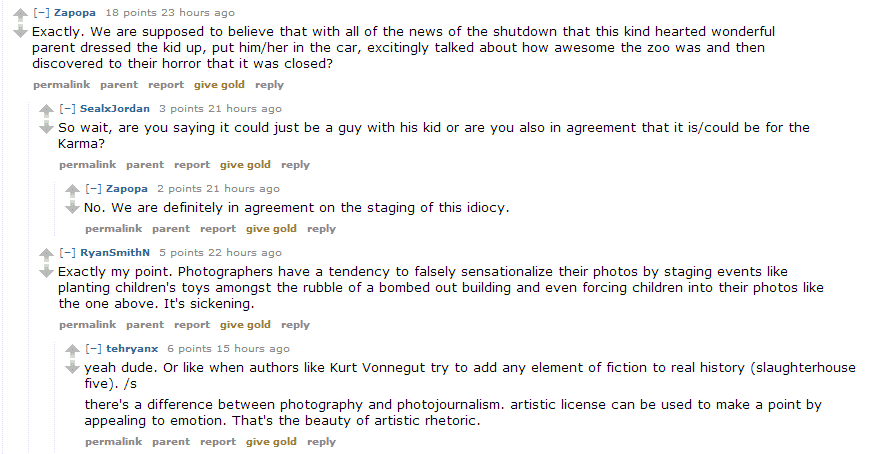 Of course, not everyone thinks this is staged.

“Call me a sucker, but I could see someone bringing their kid to the zoo. I have seen posts of people going to parks in the hopes the park is open, only to find the park closed,” wrote reddit user petedacook. “Yes, this actually happens. Not everything on Reddit is staged for Karma.”

Do you think the “saddest shutdown photo” is super sad, or super shifty?