Why I’m Deleting My Facebook Fan Page (And Why You...

by Dusten Carlson 9 years ago3 months ago

I have decided to delete my Facebook Fan Page after realizing that I’m not famous.

Hyperbole aside (though it’s true that I am not famous), my Facebook Fan Page, facebook.com/DustenCarlsonWriter, is indeed moribund and scheduled for deletion five days from now. I’m going to explain why in the hopes that you, the aspiring Internet personality reading this, can learn a thing or two about properly creating, managing, and engaging with an audience on Facebook.

The end of my Facebook Fan Page marks the close of a grand experiment endeavored upon by my colleagues and I that started one year ago (you can follow Editor in Chief Dan Evon’s progress with Twitter domination thus far here and here). Basically, we had all decided that we would create individual accounts on all major social networks, use best practices suggested at that time by so-called experts, and see if it pays off.

It doesn’t. Or it does, depending on a number of things you probably don’t have time to invest in. And it’s not because the field is saturated (thought it is) and it’s not because you’re too stupid to figure it out (though I might be). It’s because sometimes you just can’t fit a square peg into a round hole and you have to admit it.

Though I understand that this will be a very niche article, I hope it’s helpful to you. Here are the lightning round reasons why you’re better off not wasting your time with a Facebook Fan Page right now:

The Problem of Time and Resources

When I launched my Facebook Fan Page late last year, I figured that I would use it solely for professional reasons. I could stop annoying my friends with my content on my personal page, I could reach out to a broader audience, and I wasn’t really risking any backlash on my friends and family from unsatisfied readers who follow me to my own page.

I figured “I’ll just deck the page out with all of the appropriate information, a catchy tagline, a creative background photo, and then supply SEO-tailored links to my articles as I write them with a snarky little tagline!” 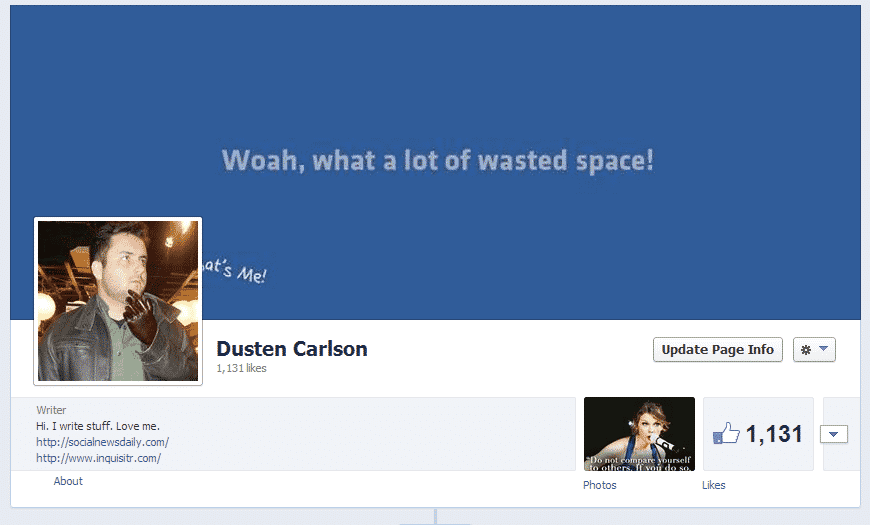 It was a colossal failure.

As a young professional still paying my dues, my workload for the various websites I’m committed to is enormous. I didn’t have time to jog over to Facebook after every article, come up with a witty and engaging tag, diversify posts, etc. To solve this problem, I just plugged my RSS feed into the page via the Graffiti app so that I’d never have to even see the page.

That resulted in zombie posts.

The problem with zombie posts is three-fold. First, you alienate the few friends and family generous enough to follow your page, encouraging your delusions of grandeur. After spamming their newsfeed non-stop, you receive the hidden demerit known as “hide from timeline.” Second, that also applies to any number of organic fans who threw you a like. Third, you completely remove a fan’s ability to get to know/engage with you personally, which is the whole fucking point.

Because of my various commitments, I just didn’t have the time to really build a community at that page with the few who met me there. I didn’t get to reply to every comment or message, I didn’t diversify my posts, and I didn’t have wherewithal to just post a simple status update or joke from time to time.

Also, I’m not that funny.

The Problem of Buying Social Popularity

To save my dying Fan Page, I decided to do a few things that you might (justly) call “cheating.” At first I entertained the thought of promoting posts. It’s offered by Facebook, so it’s fair game. Two problems.

So instead I turned to Fiverr.com to buy some fans. Though there are some persuasive arguments for this practice, most experts agree that this is a bad idea, and this is one of the rare instances where I fully agree.

Not only is it completely black hat, it gets you nowhere. “But that’s not the point,” the occasional buy-fans-advocate will say. “You know you’re not getting real fans, but bigger numbers make you look more important and will lead to real, organic fans who take you seriously.”

I’ll say this once: That is complete bullshit.

If you’re like me (and I’m guessing you are if you’re reading this) then you have only two possible reasons to buy fans: You have no idea what you’re doing otherwise, or you’re desperate. Hence, buying fans is solely for your peace of mind.

I’ll admit I did the same thing on Twitter, too. I have over 1,500 fans and I think less than a third are legitimate. I have seen more success on Twitter, but that’s because I actually talk to people, engage in communities, use smart hashtags, diversify posts, and none of that has anything to do with the 1,000 fake fans from Russia I have.

They contribute literally nothing.

Oh, and the bit about “you won’t succeed for long” up top? I actually did get some immediate traction out of my “fake” Facebook fans. This pushed my “# of people who saw this post” up significantly. For a week. Now look where it’s at. 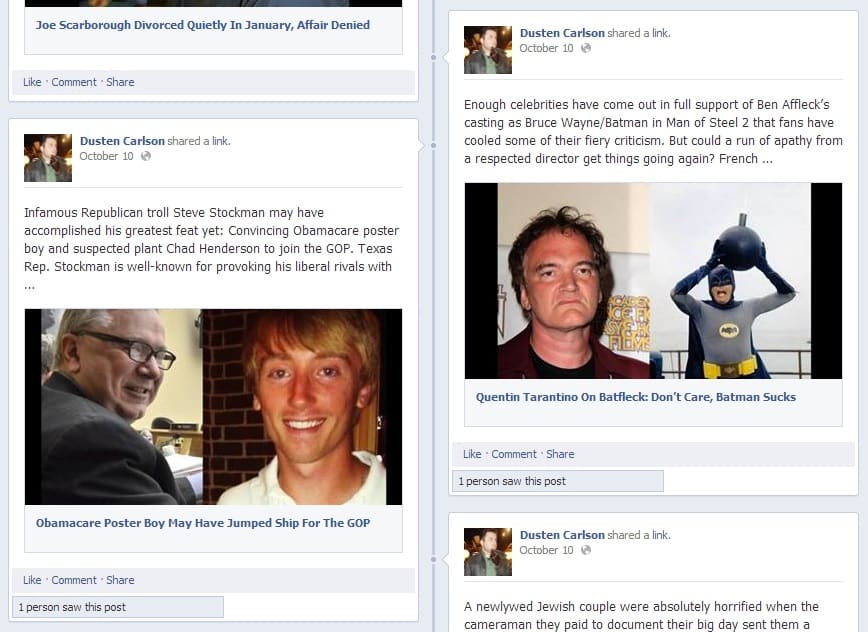 That’s not a reflection of analytics, either. Search engines like me fine (when I write something worth reading) and my pageviews are perfectly modest. They just weren’t coming from Facebook at all. The Internet liked my work just fine, it just didn’t like me. Or it didn’t know me or think I was worth knowing, but you know? That’s okay. That’s actually good for where I’m at. Still, what started off as an experiment became so personal. I had put the cart before the horse, and feared I was running the risk of poisoning the well.

I was just a spam zombie talking to robots.

The Problem of Motive

Ask yourself: What do you really want out of your Facebook Fan Page, or your Google+ and Twitter handles anyway?

Whether or not you have a desperate desire to be liked (and if you don’t, believe me it’s contagious), chances are you really just want people to see, enjoy and share your content. That’s what pays your bills, right? Not your ego.

Whether you’re an artist, a musician, a writer or anything that could be considered a “personality,” it’s your work that matters more than anything. Why are you marketing yourself first and your work second?

Let me tell you about SocialNewsDaily’s Facebook page (shameless plug, follow here!) which has 3,200 real honest-to-goodness fans. We only recently started tasking it seriously, but there’s actually a budding, beautiful community there. Hundreds of real people see each post, and a few are bold enough to “like” them.

We’re seeing increasing numbers and more engagement by the day because, again, we’re diversifying posts, we’re engaging with our followers, we’re providing good content and we’re not forcing it down anyone’s throat. We’re not even promoting posts yet. We’re just being good stewards of our following, and it’s growing.

Now to the Tenuous Advice Portion of the Article

Simply, it seems to me that brands do better than people. Unless you’re superstar already, there aren’t many good reasons for you to try to build a following on your own back, since nobody knows who you are. Do you think that the Matt Taibbis of the world went from drone to Stone on their good looks and charm alone?

The Matt Taibbis of the world didn’t become somebody that way. They let their work speak for them and then jumped on the social bandwagon as an afterthought. After they were somebody.

Nobody knows who I am. People do know what SocialNewsDaily is. It’s in Bing, it’s in Google News, guess what isn’t? Me.

Do yourself a favor and take the pressure off yourself. There’s a lot of good advice out there and a lot of bad, but most of it applies to “stuff,” not “people,” and that’s not clearly addressed. The grand social experiment is at an end, and you know what I discovered? I had more fun and was far more successful managing SocialNewsDaily’s Facebook Fan Page than my own.

Five days from now, facebook.com/DustenCarlsonWriter will be gone, and I won’t even care. I’m tired of bending over backwards to promote myself. Follow me on Twitter.