The latest burger at Kuma’s Corner lets everyone enjoy the Body of Christ.

In a tribute to the metal band Ghost, the Chicago burger joint is offering this unnamed beauty, which we’re going ahead and calling the Body of Christ Burger until a decent pun presents itself.

It is composed of:

It’s the most sacrilicious thing we’ve ever seen for sure, and a handful of observers on the restaurant’s Facebook page are giving them a hard time about their religious insensitivity, even as the post goes viral with over 1,500 “likes” and 800 shares. Still, for every critic, there exists a highly symbolic three defenders, by our count. 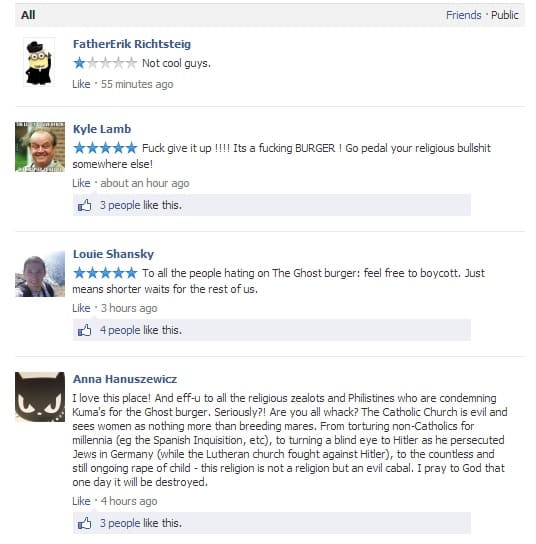 But the restaurant’s Luke Tobias tells the Chicago Tribune that it’s all in good fun, and that he understands why some people are offended. Still, he adds, if the wafer isn’t consecrated, it’s really just a cracker. Which is interesting, because it seems to indicate that he’s thought about this more than some of his critics.

Check out Kuma’s Corner’s Facebook page here. They’re metal-themed “purveyors of fine bovine genocide,” and hey, I’m in the Chicago area and starving, so see you guys later. Peace be with you and also with you.