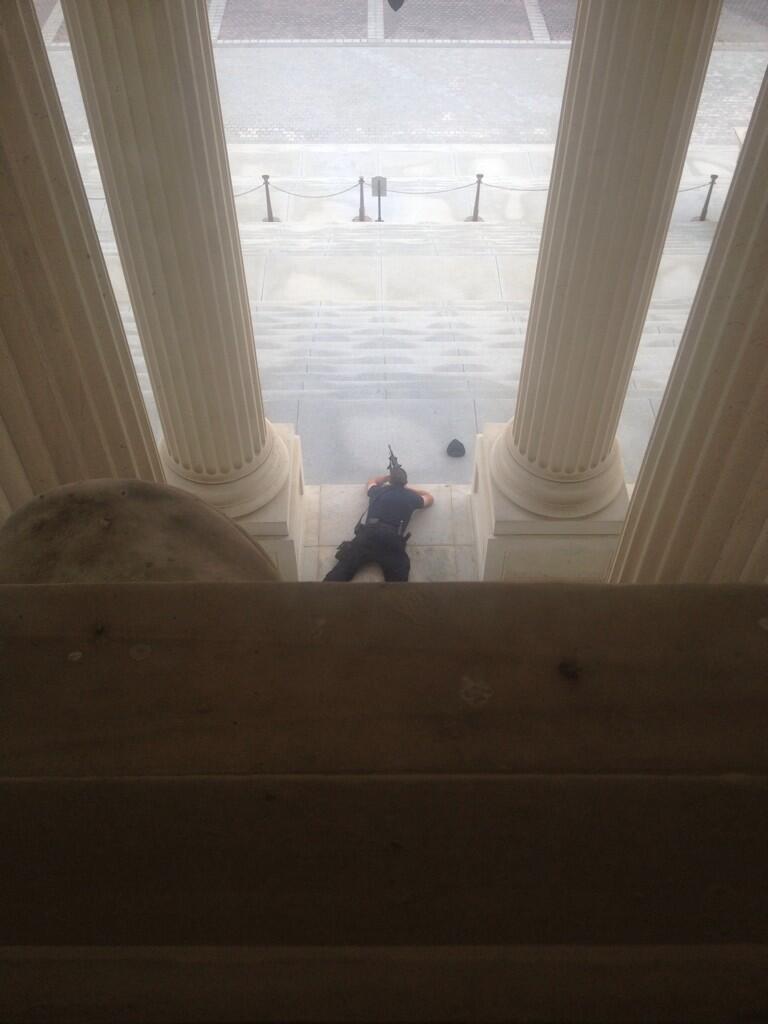 Various news agencies are reporting that shots have been fired outside the Capitol Building in Washington, D.C.

We don’t have a lot of information at this time but several reports from Twitter suggest that a vehicle was surrounded and then opened fire.

Update: Below we have reported the situation as it unfolded. The Capitol Building shooting is believed to be the result of a female driver who attempted to run through the White House gates. According to several reports the female was driving with a child in the car.

The Capitol Building was put on lockdown after shots were fired and dozens of Capitol Hill police officers, some carrying machine guns, rushed to the scene of the crime.

Here is a live street of several tweets and photos that have arrived so far:

BREAKING: Police were chasing a black car near the Capitol building. They cornered the car and that’s when shots rang out. @Chris_Moody

Huge police presence outside the US Capitol building where there are reports of shots fired. #7news pic.twitter.com/pQcSQY7uqP

We have @nowthisnews reporters on lock down in the #Capitol building after reports of gunfire outside. Stay tuned… we’re collecting video.

We will continue to follow this story as it breaks.

Update (1:45pm Central): The hacktivist group Anonymous through its @YourAnonNews account claims 13 shots were fired during the exchange:

At Least One Person Injured

Shots fired at the Capital, @CNN reporting one injured. To my friends: I am working from home today. http://t.co/A163yD4pcs — Jacqueline Klimas (@jacqklimas) October 3, 2013

Officer Pulls One Person To Safety

Literally was dragged in by cop as he heard shots fired come over the radio. Now this: pic.twitter.com/K1AJwIEV6G — KateNocera (@KateNocera) October 3, 2013

TVs At Capitol Building Urge Everyone To Take Cover

Police were chasing a black car before the shooting occurred.

Police were chasing black car near Capitol. They cornered the car and then shots rang out –YahooNews http://t.co/kBMzGYrr5i — The Atlantic Wire (@TheAtlanticWire) October 3, 2013

At least several dozen police cars are at the scene of the Capitol Building shooting:

Police are surrounding the Capitol Building. No official announces at this time:

The New York Post is reporting that a police officer was injured during the Capitol Building shooting:

Police officer injured in shooting at US Capitol http://t.co/OaYMkqZUjs

Some Twitter users have decided to attack members of Congress for their recent actions as many innocent people remain in hiding:

Shots fired outside US Capitol. We now have reckless criminals inside AND outside the Capitol building. #governmentshutdown

People run for cover as police converge to the site of a shooting at the Capitol. (AFP/Getty) pic.twitter.com/YhZXVVyv9N

Point A on our Google Maps screen capture shows the White House Rose Garden and point B is where the shooting is reported to have occurred:

Breaking: Someone tried to ram gate at the White House, then fled to Capitol Hill. Shots were fired, but unclear by whom.

As shots were fired people walking around the Capitol were captured by camera as they dove to the ground:

PHOTO: People take cover as gun shots were being heard at the US Capitol in Washington, DC, pic.twitter.com/dADzzxF2Da

CNN reports child in car w/ woman who tried to rammed gate near White House. That led to chase and gunfire http://t.co/K2SDFOcKSP

Several reports suggest that the child in the car was NOT harmed during the shooting.

Bloomberg News reports that the shooter is dead http://t.co/Ah4v7Qjdfd

Amid all the turmoil there are plenty of Internet trolls using a tragic event to attack ObamaCare. Here’s one of the more pathetic attacks we found:

Instagram user NewsWithNicole offers up this scene from the South side of the Capitol Building. The video was taken just as several innocent bystanders began to flee.

While we stray away from jokes during moments of tragedy this Twitter users comment was right on point:

Someone fired shots near the capitol building and got in a police chase, thus shutting down the government even more than it already was.

The Capitol Building is no longer on lockdown which means the situation has likely been resolved to some end.

More details to following in the hours and days to come.

The moment he was inaugurated, immediate changes made by Biden made headlines across the country. These are many of the controversial issues and topics that were shunned and ridiculed by the former administration. Americans can finally breathe a sigh of relief that these concerns have finally reached government policies. It seems clear that Biden has been… END_OF_DOCUMENT_TOKEN_TO_BE_REPLACED

Presidential pardons are one and many in the history of the US. There are many times when US Presidents granted reprieves for their citizen’s misdeeds. The US President may grant a pardon for any individual, including himself, for any crimes done against the country and its citizens. This issue of Presidential pardons has been trending… END_OF_DOCUMENT_TOKEN_TO_BE_REPLACED