In a recently posted open letter directed towards Miley Cyrus, singer Sinead O’Connor called out the Wrecking Ball singer for her wild and provocative ways. In the letter O’Connor writes that she is “extremely concerned” that Miley believes it is “in any way ‘cool’ to be naked and licking sledgehammers in your videos.”

“It is in fact the case that you will obscure your talent by allowing yourself to be pimped, whether it’s the music business or yourself doing the pimping.”

Sinead continues her attack with more messages of doom and gloom:

“Nothing but harm will come in the long run, from allowing yourself to be exploited, and it is absolutely NOT in ANY way an empowerment of yourself or any other young women, for you to send across the message that you are to be valued (even by you) more for your sexual appeal than your obvious talent.”

Talking about the haters in the music industry O’Connor adds:

“They will prostitute you for all you are worth, and cleverly make you think its what YOU wanted.. and when you end up in rehab as a result of being prostituted, “they” will be sunning themselves on their yachts in Antigua, which they bought by selling your body and you will find yourself very alone.”

The letter then goes on to talk about the dangerous world we live in and she warns Miley Cyrus that her actions are telling young girls that it is okay to be prostituted. O’Connor ends by telling Cyrus, “It’s so not cool Miley … it’s dangerous.”

So how did Miley Cyrus respond to the sudden attack from Sinead O’Connor? With a single tweet:

Before Amanda Bynes…. There was…. pic.twitter.com/6JZPVnunPc

So was Miley Cyrus right to send out tweet that attacked Sinead O’Connor’s bi-polar disorder? Probably not. On the other hand sending an open letter to a 19-year-old girl for what amounts to a tiny bit of publicity isn’t really the best use of O’Connors time or energy. 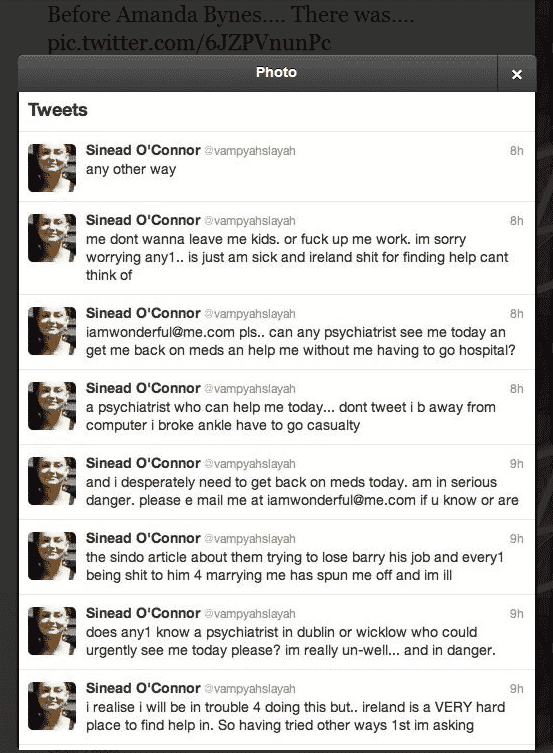 Sinead O’Connor may have penned a much longer attack, but Miley Cyrus landed the haymaker and claimed the Tweet K.O.