A post from Mrs Momblog is going viral on Facebook this morning thanks to what must be a pretty across-the-board feeling among moms and teachers that the Common Core model of education is total crap.

In an open letter to the New York State Education Department, Mrs Momblog, a teacher and a mother, writes that she has always played by the rules despite philosophical disagreements with Common Core. But everything came to a head when her younger son came home absolutely frustrated with his education.

Not like normal kid-frustrated. She argues that Common Core has changed him, and that’s for the worse.

“When my eight year old boy, who loves to read to his little sister and is excited to go to back to school come July of every summer, calls himself dumb because he is bringing home failing test grades, then this has turned personal. My son isn’t dumb, Commissioner King. He works hard to learn, he writes stories and songs, builds entire football stadiums out of Legos in record time, and he can explain how to divide in his own words. He. Is. Not. Dumb. But when he gets consistently failing grades on the module assessments, what message do you think he’s getting?”

You can read her entire post here, but what’s interesting about this story for us is the amount of traction it has been getting on social media today.

Posts on her Facebook page averaged around 10-20 likes each before her Common Core post, which got 1,200 in addition to nearly 400 comments and 1,500 shares. 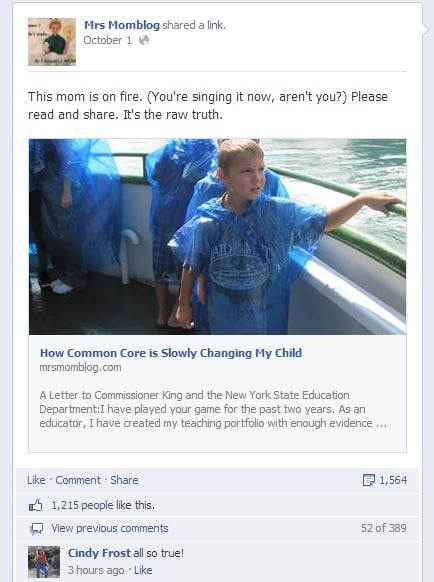 She also gained about 4,000 new followers. 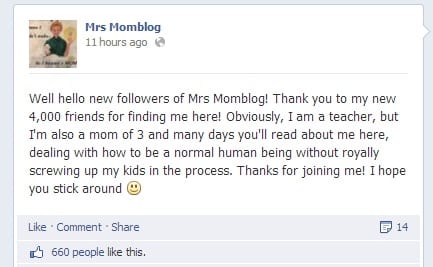 We reached out to Mrs Momblog for comment on the response she’s gotten from her blog post. She admitted that going viral is “so surreal,” but added that she’s grateful she could encourage a much-needed dialogue on the issue of Common Core education standards.

“I’m thrilled that people were able to connect with this post. I hear of so many different forums, groups, and rallies where people are trying to make their voices heard on behalf of their children. The conversation needs to turn from ‘us vs. them’ into an intelligent dialogue of what we (parents, teachers, and policy makers) can do to help all children achieve a higher standard in school without sacrificing the well-being of the child.

“I have seen, however, in just the day and half since I posted this letter, some great conversation starting. My hope is that this post will spark intelligent, respectful dialogue and lead to a positive climate change for our kids and teachers. I just hope the policy makers are seeing the response and are willing to look at the reality of what an average elementary child is experiencing, examine where we want these kids to be, and make realistic changes.”