by Mike Stenger 9 years ago6 months ago

Snapchat has gained a massive following over the ability to self-destruct messages, and has launched a new feature called Stories which are posts that live for 24 hours.

You can view a collection of Stories from friends who shared with you, and to create your own, simply select “My Story” above the friend or friends you want to share with.

Users can also tap a new shortcut button within the built-in camera screen to share a new story.

Unlike regular posts which self-destruct after viewing once, Stories can be viewed multiple times over the course of 24 hours.

According to Snapchat CEO Evan Spiegel, Stories are the social network’s answer to sharing a “snap” or post with your entire friends list.

A generic “Send All” button was believed to have negative implications, and that is where work to create Stories began.

Each person in your friend list is now flanked by a circular thumbnail of the most recent moment in their daily Story. Holding your finger on a friend’s name starts a stream of every snap they’ve shared to their Story within the last 24 hours. “When you have a minute in your day and are curious about what your friends are up to, you can jump into their experience,” says Spiegel. If you’re bored, you can skip ahead by tapping with a second finger. Unlike most forms of social media updates, Spiegel stresses, Stories play back in the order they occurred, and not in reverse chronological order.

Not leaving any users out, the new feature is now live on both Android and iOS.

Back in June, Snapchat raised $60 million in new funding, and now sees 350 million posts per day. 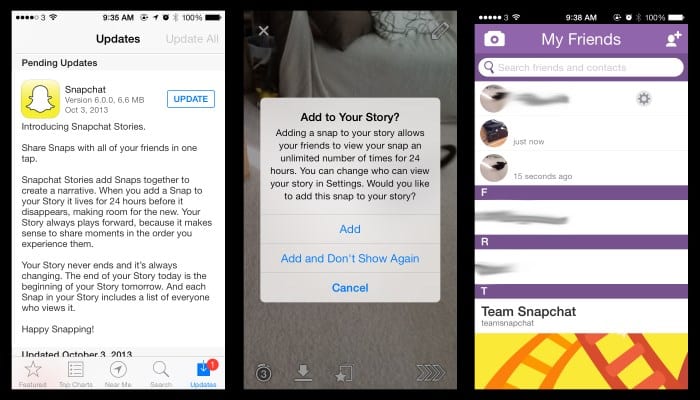