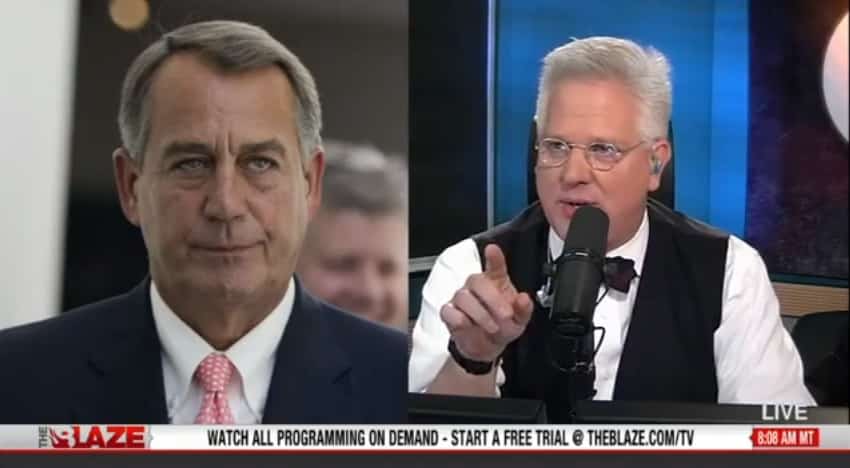 Been seeing #DefundTheGOP a lot on Twitter lately? We’ll explain.

Assuming you have armchair knowledge of the situation in Washington right now, you know that House Speaker John Boehner has lead what is likely his final charge against President Obama, Harry Reid and the Affordable Care Act this week, resulting in a massive government shutdown.

The first in nearly 20 years.

Even if you disagree with his politics, there’s something to be said for Boehner’s consistency. Self-destructive though he has been, he at least has the stones to stand by his convictions and the integrity to … wait, leaked emails show that Boehner was in secret talks with Reid, trying to keep Congress’ Obamacare exemption while publicly damning it? Well, shit.

And that was about it for Glenn Beck. Though many critics see Beck as little more than a conservative mouthpiece, he actually criticizes the GOP quite often, and harshly.

Case in point: #DefundTheGOP is his baby.

Watch his takedown below, in which he calls John Boehner a hypocrite and a “lying thief.”

Hence, #DefundTheGOP. It’s a promoted hashtag meant to get conservatives to stop giving money to Republicans until folks like Boehner are out of the picture. Think of it as Atlas Shrugged, but turned on the GOP.

Is it working? You tell me.

#DefundTheGOP I’m proud of the Republicans who are standing their ground against Obamacare. Americans don’t want it-do you hear me Reid?!!

@GrahamBlog Perhaps if u had a spine stood with @SenTedCruz we could have #DefundObamacare ,but now we want to #DefundTheGOP !

The ONLY way to make them listen is to #DefundTheGOP until they stand for us and stop the back-room deals with #Socialist Dems.

If the Republicans don’t want to listen to their own constituents, it’s time to #DefundTheGOP.

#DefundTheGOP to force @SpeakerBoehner to resign AND #DefundNevada until they toss out the human waste Harry Reid.