Breaking Bad Finale Shows The Importance Of Having A Gun...

The Breaking Bad finale was many things to many people, but if you’re really looking for a unifying moral theme from last night’s episode, it’s that guns are good and everyone should have one nearby. 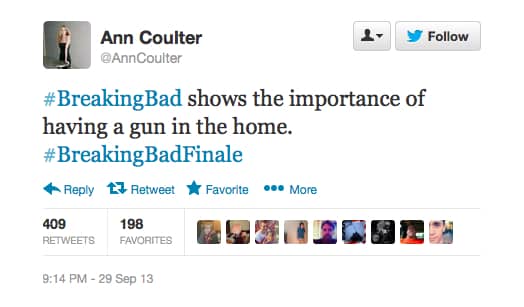 Well, that was Ann Coulter’s takeaway.

But turning the finale of one of TV’s most beloved shows into a debate about guns didn’t really go over that well for the conservative firebrand. The response from Twitter users was overwhelmingly negative (some minor spoilers ahead, people).

Or having a pet goldfish. “@AnnCoulter: #BreakingBad shows the importance of having a gun in the home. #BreakingBadFinale”

Yes, that’s the moral. You nailed it. RT @AnnCoulter: #BreakingBad shows the importance of having a gun in the home. #BreakingBadFinale

.@AnnCoulter Uncle Jack the Nazi had a gun in his home and it was used against him, as a large percentage of guns in the home are. Good try?

@ericjedelstein Uncle Jack shows us it’s important to have an automatic sweeping daisy cutter machine gun in the trunk. Yanno, for the kids

THANK YOU. Hope all meth dealers heed this vital safety info RT @AnnCoulter#BreakingBad shows the importance of having a gun in the home.

If you caught the Breaking Bad finale last night, suggest your own moral takeaway in the comments.