Leon Purvis Wants To Know Why Celebs Don’t Want To...

YouTube star Leon Purvis is starting to wonder why he keeps getting the cold shoulder.

In August, Leon reached out to us for help with a little campaign he was waging. The basic gist was, if he could get Olympic gold medalist Gabrielle Douglas up to 800,000 Twitter followers, she’d think about going on a date with him. This wasn’t just in his mind, either. She actually tweeted him and everything: 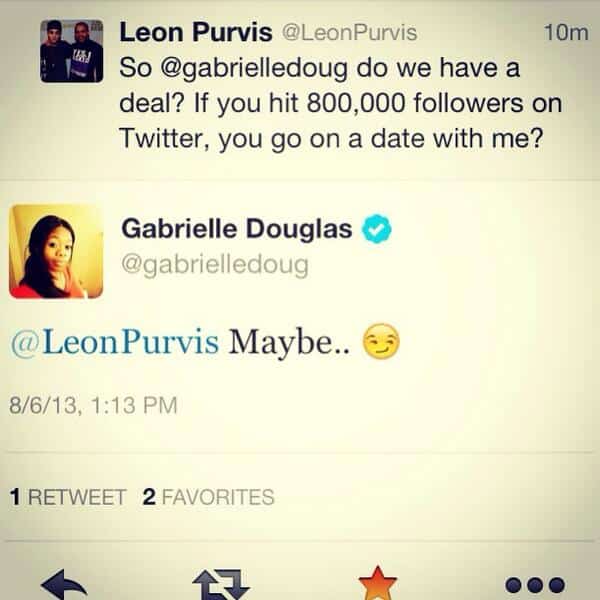 Naturally, he thought they had a deal, we thought the story was cute, and that was all she wrote.

But it’s almost October, Gabby is sitting on 808,064 followers, and Leon is still dateless. See, she didn’t actually tell him “no” after saying she’d “think about it,” and he’s feeling a little left-hanging.

So he did what all YouTubers do. He made a video.

A few things here: Yes, regular schmoes asking celebrities on dates via social media is becoming increasingly common, but just because you wage an epic, viral campaign to score a date with Kate Upton doesn’t mean that she owes you the time of day.

Also, Gabby is Leon’s third celebrity “date” attempt. As you see in the video, he’s chased Justin Bieber (as bros) and even President Barack Obama, who both turned him down. The short logic is “because they’re celebrities and they’re busy,” and that also applies to his latest attempt.

Still, Leon seems to just want a solid answer, even a solid “no.” As you saw, there’s some conspiracy that Ms. Douglas only “used” him for the followers … I don’t see that. But since she said maybe, she probably should take some time to punch out a definitive “It’s not you, it’s me … ” on Twitter.

We’ll let you know if that happens, but let us know what you think of Leon Purvis’ quest: Should he give up, or should Gabby Douglas give him an answer? Leon isn’t the only one awaiting an answer, either. If you read this, Ms. Douglas, we’ve tried several times to reach out to you for your side of the story. Drop me an email!