by James Kosur 9 years ago9 months ago

Alicia DiMichele is the newest member of the Mob Wives reality TV series and her actions definitely match that of a newly minted criminal-based celebrity. A federal judge recently gave DiMichele permission to visit her son in West Virginia so she could help him “move into the dormitory” at the University of West Virginia.

Under terms of her $50,000 bond the Mob Wives star is not allowed outside of three states. However, DiMichele convinced a federal judge to give her a bit of leeway “in case of emergency.”

So what did she do with her freedom to roam? She skipped her sons move-in date and instead traveled to Las Vegas with her VH1 realty TV co-stars.

In the photos Alicia DiMichele is witnessed sitting in a Ferrari, riding on a party bus, and posing in skimpy swimwear.

DiMichele, the wife of Edward Garofalo Jr., is awaiting sentencing for helping him embezzle $40,000 in Teamsters pension funds.

DiMichele already admitted to “agreeing to help” her husband steal the money. Two wiretaps and the testimony of two witnesses all but guaranteed her guilty plea.

Until this past weekend DiMichele was restricted to travel inside New York, New Jersey, and Pennsylvania.

In June the mob wife gave a sworn declaration stating she needed permission to travel to see her son. In her declaration she wrote:

“More importantly, because my son will be in Morgantown, West Virginia, I need the ability to travel on very short notice in the event of an emergency.”

“I do not intend to travel regularly, except to visit with my son for brief periods.”

Here’s one more of the Mob Wife’s Instagram posts for your enjoyment: 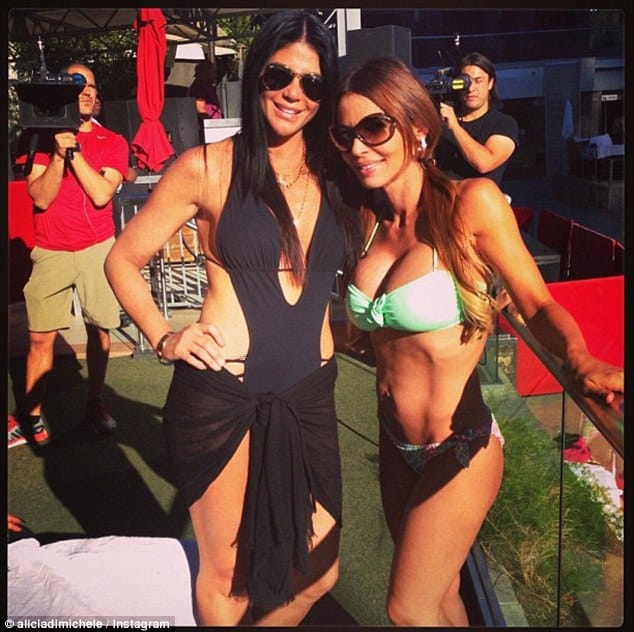