Is this really happening? The Breaking Bad finale is only a few hours away and apparently Aaron Paul is having a little scavenger hunt to celebrate.

The Breaking Bad star has already flown out a few fans to Hollywood to watch the series finale and apparently he’s got a few more tickets to his party. The actor just sent out a tweet saying that he put 20 tickets for the Breaking Bad finale around Hollywood.

Scavenger hunt begins in 30 minutes. 20 tickets are hidden around Hollywood. Exact location will be given out very soon. #BreakingBad

Did you read that? You did? Then why are you still reading this?! Go! Buy your plane ticket. Get on the train. Run. Get to Hollywood now because the scavenger hunt starts in thirty minutes.

This sort of thing isn’t too surprising. Aaron Paul is a pretty awesome guy and he’s always doing something for his fans. He hung out with one fan in Hollywood today …

The winners of the Omaze raffle and I cleaning Bryan Cranston’s star. Thanks for the years my friend. pic.twitter.com/o3x2ATVlhH

… and he met another at his hotel.

And this isn’t the first time he’s had a scavenger hunt for tickets. 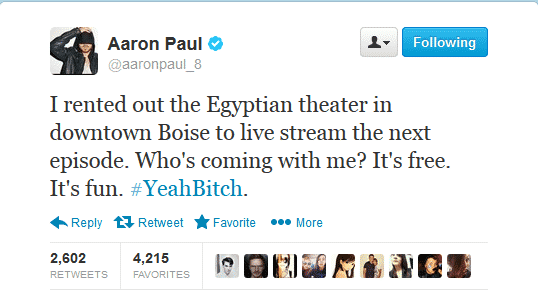 Of course, Aaron Paul isn’t the only Breaking Bad star who appreciates his fans.

Thanks for joining us on this crazy ride…what an amazing 6 years it’s been. Big love to you all…and purple kisses.

Well, this is it. The last episode ever of Breaking Bad. Thank you for sharing this ride with me. Without you we never would have lasted.

Are you excited for the Breaking Bad finale? Here are some scavenger hunt hints from Aaron Paul.

Pair of tickets shoved under the trash can in front of the Collison Repair center at Santa Monica and Wilcox. #BreakingBad

A pair of tickets behind garage sale sign at Windsor and Melrose across from Paramount entrance – get yo tickets, bitch! #BreakingBad

A pair of tickets behind garage sale sign at Windsor and Melrose across from Paramount entrance – get yo tickets, bitch! #BreakingBad

Behind the Funyons inside of Walgreens at Santa Monica and Highland. Funyons are awesome!! #BreakingBad

Inside the black Audi parked in front of the laugh factory on sunset. I will be holding them. #BreakingBad pic.twitter.com/pXWwA2WVYv

Another pair wedged between the planter and shrubbery at Sunset Car Wash at Sunset and Hayworth. Go get ’em! #BreakingBad