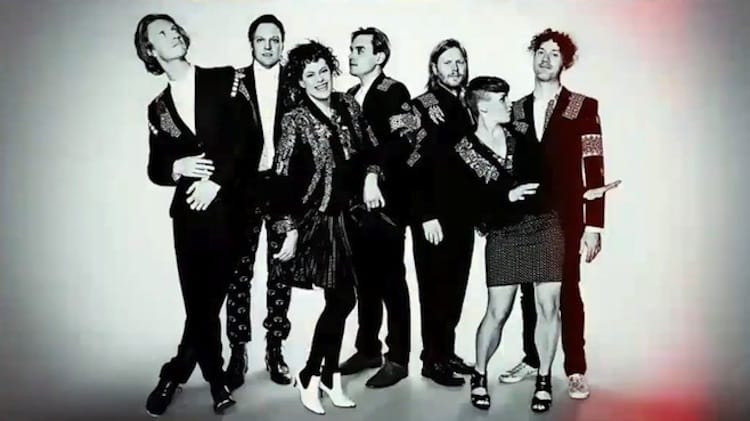 The song is the second single from the groups upcoming Reflektor album which will hit store shelves on October 29.

Arcade Fire performed “Afterlife” and the albums self-titled track before heading off to play at NBC’s live post-SNL show.

Critically acclaimed groups often face criticism and support from their fans when a new track that departs from their traditional sound surfaces. In this case Arcade Fire has managed to receive a good amount of support. Here are some of the first tweets that arrived following the song.

Afterlife has a similar vibe to Reflektor. Definitely gonna like this album @arcadefire

Some fans have reserved their judgment over the sound by pointing out that Saturday Night Live isn’t historically known for featuring a musician friendly stage.

I can’t even make a sound opinion about Arcade Fire’s “Afterlife” because the SNL has such a bad reputation for sound mixing.

Here’s the groups performance of “Reflektor” which debuted the same night:

The group even appeared in a new Tina Fey starring skit about a gameshow called “New Cast Member or Arcade Fire?”

Just this week, lawmakers approved a bill establishing the District of Columbia (D.C.) as the 51st state of the United States of America. This is after multiple calls and protests from the citizens to finally consider D.C. as a state.  However, the bill is not out of the woods yet as it faces multiple oppositions… END_OF_DOCUMENT_TOKEN_TO_BE_REPLACED

John Bolton’s new book entitled ‘The Room Where it Happened’ had been stirring up quite the attention since it was announced for release last week. Officially released only June 23, the new book seems to threaten the Trump administration as there had been moves to get it unpublished. The request was later on turned down… END_OF_DOCUMENT_TOKEN_TO_BE_REPLACED

Learning about the Juneteenth Holiday The Juneteenth holiday, celebrated every 19th of June, is a commemoration of the liberation of enslaved African-Americans in the United States. It was on the 19th of June 1865 when Union Army General Gordon Granger announced General Order No. 3 in Galveston, Texas officially emancipating slaves in the entire state.… END_OF_DOCUMENT_TOKEN_TO_BE_REPLACED