The NCIS premiere set up Cote De Pablo’s exit from the show and fans are already mourning Ziva’s departure on Twitter. 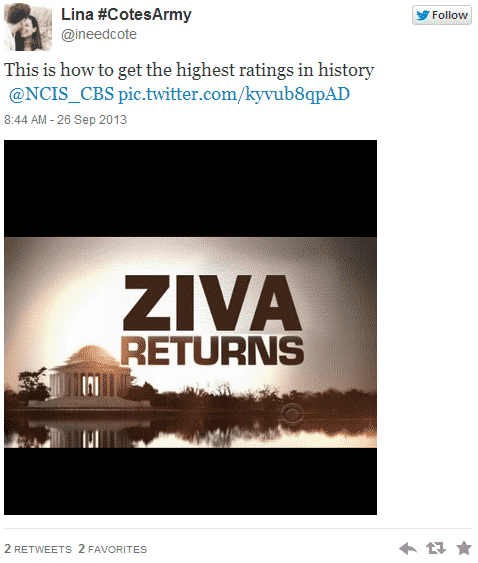 Cote hasn’t even left the series yet and Twitter users are already begging for her return.

Cote said that she was surprised by the outpouring of support and even left fans with the tantalizing possibility that she could return to the show in the future.

“The greatest thing about this last episode is that Ziva doesn’t die. As long as a character doesn’t die, the character can always come back. Not that it would actually matter, because we bring back characters from the dead all the time on NCIS!”

The NCIS premiere had the team searching for Ziva and next week’s episode will bring Tony and Ziva together again. NCIS sent out a little teaser on Twitter showing the two characters standing at the airport for one final goodbye.

NCIS has close to 500,000 Twitter followers and just about all of them were glue to their TV sets for the premiere this week. Cota De Pablo will be leaving the show after next week’s episode and CBS is promising that they will deliver a huge emotional payoff.

…in episode 2 — Tony will lie to someone very close to him regarding Ziva. Have a great night! Can’t wait for next Tues- Gary Glasberg

Did you watch the NCIS premiere? Are you excited for next week?

Still not over this promo! #ncispic.twitter.com/TonE713CNe