Zynga on Thursday rolled out a new platform that allows users to receive energy through “reward advertising” via the CityVille platform.

Players can earn needed energy by agree to view advertiser video ads. During the initial testing phase advertisers include Coca-Cola, MasterCard and the DVD release of the 20th Century Fox film What’s Your Number?

While not available to all social gamers at this time some users are being given the chance to “interact” with video ads in order to earn money. For example users can watch a trailer for What’s Your Number and then earn CityVille energy. MasterCard on the other hand asks users to take a short survey.

If a player is running low on energy they see the following screen: 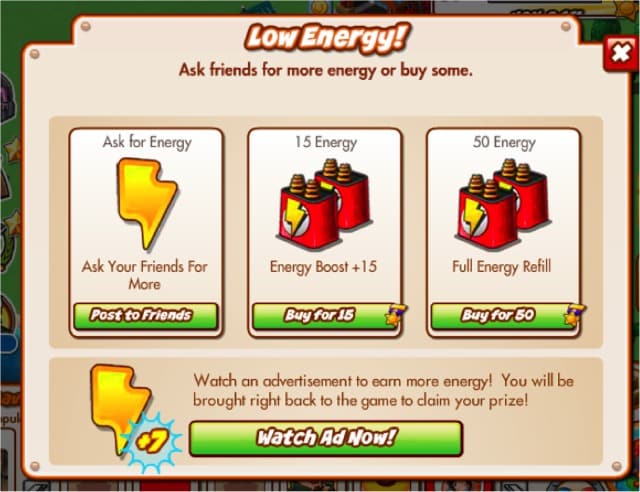 Facebook rolled out a very limited version of a similar program for Zynga games last year however the product never really picked up steam, leaving Zynga to create an in-house version on their own.

The company is hoping that they can increase advertising revenue which only accounts for a very small portion of the company’s earnings at this time.

Will you click on Zynga reward advertising options to earn energy rather then buying it outright or waiting for your energy levels to refill over time?