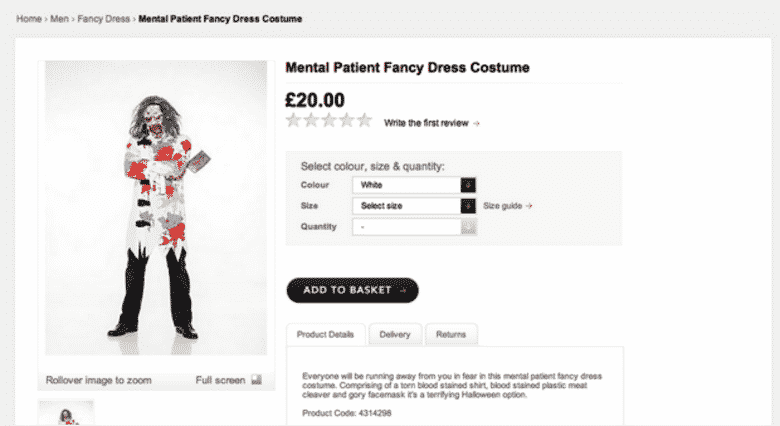 If you want a scary Halloween costume they are in abundance for October 31. If you wanted a scary costume that is also highly offensive UK supermarket chain Asda for a short period of time had you covered.

The company came under fire this week after they started offering the “Mental Patient Fancy Dress Costume” which depicts a mental patient covered in blood while holding a meat clever.

.@asda is it just “mental patients” you pick on or do you have hallowe’en costumes depicting other health conditions? http://t.co/Y4sLckV3pr

“Everyone will be running away from you in fear in this mental patient fancy dress costume”. Awful stigma from ASDA. http://t.co/zC6rWH8yQ4

Why do @Asda think it’s OK to make a Mental Health costume? Would you make a Cancer Patient costume? http://t.co/QP8QceV5Hg

Immediately following those comments and dozens more the team at Asda admitted the insensitive mistake:

We’re deeply sorry one of our fancy dress costumes has upset people. This was an unacceptable error – the product was withdrawn immediately.

The apology didn’t end there:

We’d like to offer our sincere apologies for the offence it’s caused and will be making a sizeable donation to @MindCharity.

Sue Baker, director of Time to Change, run by the mental health charity Mind, appeared on BBC Radio 4 Today to discuss the costume. According to Baker:

“Nine out of 10 people using mental health services in patient care report stigma and discrimination from a range of sources”.

“Stigma and discrimination is unfortunately still really damaging in England today and this kind of myth of the dangerousness posed by people, that you should be scared of anyone who has used mental health services, is really damaging”.

The Asda situation led to Amazon UK removing the costumes image from its site. However, users can purchase other varying costumes on Amazon including the rather disturbing Child’s psychopath costume.

While Asda may have made a mistake in selling the costume, their quick admittance of guilt and their decision to reach out on social media should serve as a great lesson for other companies who find themselves in hot water.

Do you think it was irresponsible for Asda to sell the mental patient fancy dress costume?