Do you want to read Melissa Joan Hart’s new memoir Melissa Explains It All? What if I told you that the new book includes stories about drug addiction and same-sex hookups?

The former Nickelodeon actress saw the bright / downside of marketing today as the world read articles about her new book. Joan Hart had a lot of people talking about her memoir but the actress write on Twitter that people were talking for the wrong reasons.

I’m cracking up right now at how ridiculously wrong some “journalists” can get a story. Oh well!

In an interview with Life Style Magazine Joan Hart admits that she experimented with drugs in her younger years.

Joan Hart say: “I experimented with weed, Ecstasy, mushrooms and mescaline for about a year and a half.”

But before you make judgements and write Melissa Joan Hart as a drug addicted child star, read that sentence again.

And by the way, my “party life” is one chapter in a book about my entire life!! #melissaexplainsitall

For the record,I’m not denying my mistakes; I wrote it them my book #melissaexplainsitall.But the details have been messed with! — Melissa Joan Hart (@MelissaJoanHart) September 25, 2013

The actress said that she experimented with drugs in her early 20s and that it was only a brief part of her life. That brief chapter in her life, however, is drawing a lot of attention. Especially one story about exstacy, a lesbian make out session at the Playboy Mansion, and a hungover photoshoot. 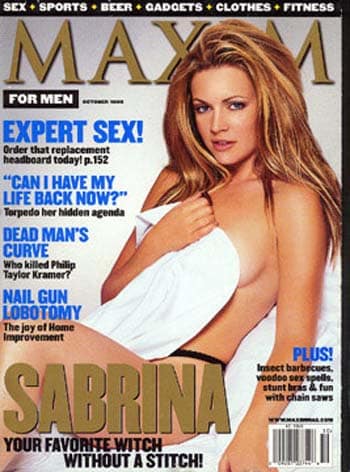 So yes, Melissa has done drugs in her life. Yes, she has kissed a woman or two. And yes, she is not perfect. She’s also not a drug addicted whore. (Or a real witch.)

Whatever you may read about me these next few weeks,keep in mind the outlet that is reporting. Also remember, I was 20 when Sabrina started!