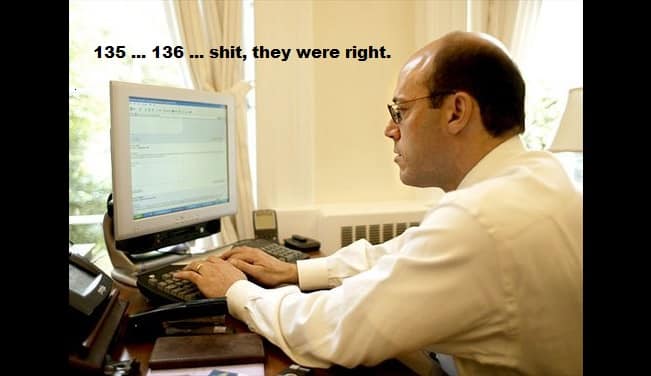 They really don’t make Obama conspiracy theories like they used to. The latest has nothing to do with where he was born or what religion he practices (now considered the “classics”) but rather the influence he wields over social media … Twitter, particularly.

It seems that Dick has bent the rules for Big-O … allowing him to use more than the allotted 140 characters. One law for him, another for the rest of us, am I right?

The latest Obama conspiracy wasn’t brought to our attention by The Trump, but rather Ari Fleischer, who was President Bush the Younger’s Jay Carney (aka – the guy you want to punch in the nards when you’re pissed at the president). After spotting this tweet, promoting Obama’s appearance at the Clinton Global Initiative …

“Not only are premiums lower than they were, they’re lower than the most optimistic predictions.” —President Obama on Obamacare #CGI2013

Question to @gov: how come @BarackObama ‘s last tweet was more than 140 characters? Does he play by different rules???

… And thus began the most asinine Obama conspiracy theory ever. Luckily, it passed its expiration date pretty quickly:

Question to @AriFleischer: How come your last Tweet ends with more than one question mark? Do you play by different grammar? cc: @gov

Fleischer did realize his mistake, and offered the following mea culpa:

@gov I retract my tweet. When I copy and pasted, it included the @BarackObama.

At least he owned up to it. You’d never get that out of The Trump.