Teyana Taylor and Rihanna are in the middle of another Twitter fight.

Rihanna, who previously feuded with Ciara on Twitter, is now trading barbs with singer Teyana Taylor.

The feud apparently started on Instagram. Taylor posted a video of her singing…

… and Rihanna responded with a video mocking Taylor.

Kind of a dick move.

Well, Taylor thought so too.

Most of the threatening tweets have been removed but the retweets are still available. (Rap Up was also able to capture a screen shot of some of the messages.)

“@TEYANATAYLOR: Don’t play wit me @rihanna fuck all this industry shit, YOU I know each other VERY well. Throwing subs 4 wat? u got my #”

Rihanna didn’t respond but RiRi’s fans sure did.

“y’all could bully everybody else get away wit that shit but that shit ain’t gone work ova here. so y’all could miss me with that NAVY shit. I sing caught in the rapture on IG then she posts her boy singing the same song, the same part, with curly hair and a snap back??? #PETTY. … petty is petty and shade is shade, bitch knew what the fuck she was doing.”

But Rihanna refused to engage Taylor. RiRi posted a few messages, like “I hate broke bitches,” but she refused to mention Taylor by name because she didn’t want to help her career.

Rihanna wrote: “I REFUSE to help your career…you will NOT get an @ from me! Not til you pay me! #nomorefreepromo #iRefuse.” 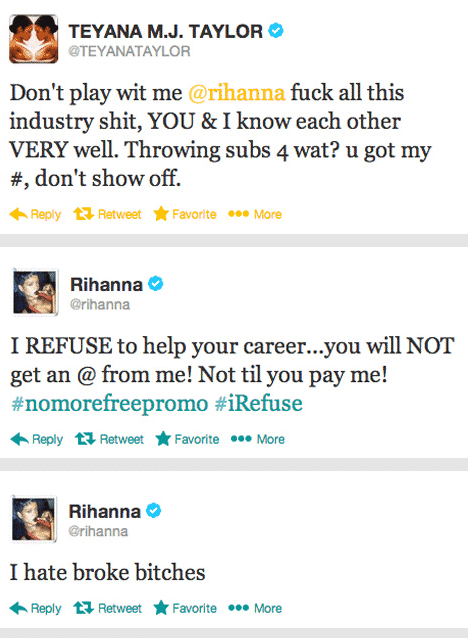 The latest installment in the Teyana Taylor Vs. Rihanna feud comes in the form of an eCard. Taylor posted this to Instagram.