Jada Pinkett Smith shared some revealing information on Facebook this week. The actress, who recently turned 42, told her fans that she has “struggled with many” addictions during her life. 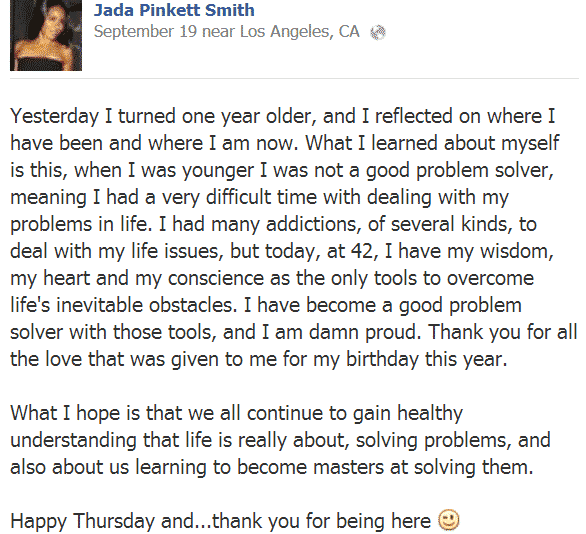 The actress didn’t get into any specifics about her addictions but many people are speculating that the actress has been struggling with an eating disorder. Hollywood Take reports that Jada grew up in a rough neighborhood and that her mother also struggled with drug addiction.

Smith said: “I grew up in a drug-infested neighborhood where you walk out each day and you just hope that you make it. I came from a war zone … There was a possibility that I wouldn’t make it past 21—that was the reality. When I turned 40 (last year) it was a surreal moment because I had never imagined reaching 40.”

Jada Pinkett Smith is one of few celebrities who really uses social media to open up about her personal life. Recently, she posted about marital troubles, a family tragedy, and love. Her Twitter account is also pretty entertaining too.

The actress recently celebrated her 42nd birthday with a Twitter pic.

My girlfriend sent this to me to this am. Thanks to everyone for the bday love:) pic.twitter.com/IvO5z33vH7

Are you surprised that Jada Pinkett Smith has struggled with addiction?