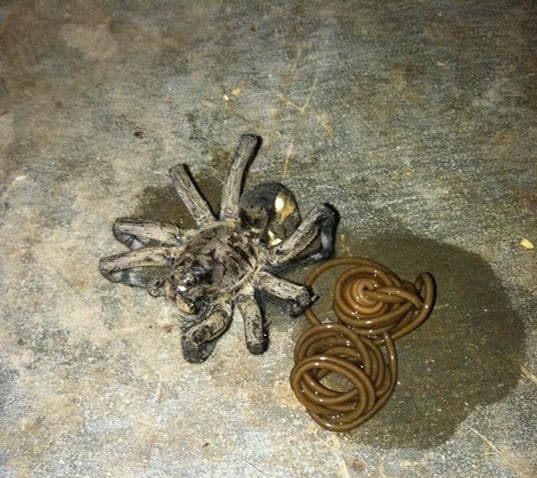 Reddit user weatherbys crushed that monstrosity of a spider and watched in abject horror as a disgusting green worm slithered out of its broken, hairy husk. Ready to really curl your legs up from under your desk? This didn’t happen in some exotic faraway place.

It happened in Missouri.

The photo above was posted to r/WTF earlier today and quickly became one of Monday morning’s top posts with 3500 upvotes. Most in the online community are simply horrified, and those in the southwestern area of Missouri are either packing their bags and/or preparing makeshift flamethrowers as we speak.

Others have expressed genuine curiosity about what this spider worm thing could be.

According to The Huffington Post, it’s actually a parasitic nematode, or a roundworm. You might remember a scene similar to this back in January:

Harvard University entomologist Dr. Brian Farrell told HuffPo that this nematode is larger than most, but that they’re actually quite ubiquitous and don’t usually have any adverse effect on their hosts.

You know, like human beings. Every single one of us is infested with thousands of these fuckers.

But remember, Dr. Farrell says they’re harmless. Except for the ones that zombify ants, making them climb to the tops of trees to draw attention to themselves so birds will eat them, allowing the nematode to then hijack a flying host.

Or the ones that zombify rats, making them charge headlong into the nearest cat’s jaws so that they can then infect the cat.

Yeah, if you see a spider worm, kill it with fire.