We noticed that an interesting hashtag is trending on Twitter today – #HappyChenChenDay. “Dafuq is that,” you ask?

Because Twitter is not exclusively a Western social network, other nations and cultures have just as much power over trending terms as we do here in America. Most days, trending hashtags are either universal, a la #ilovescience, #icantlivewithout, etc. or more or less products of western pop culture, a la #BreakingBad or #Batfleck.

But other countries have pop culture too, and that means that occasionally, we get hashtags that make no sense to our western sensibilities.

Today, the hashtag is #HappyChenChenDay.

We’re sure you’ve noticed it. After all, it has generated the most tweets today, according to MSN Trends: 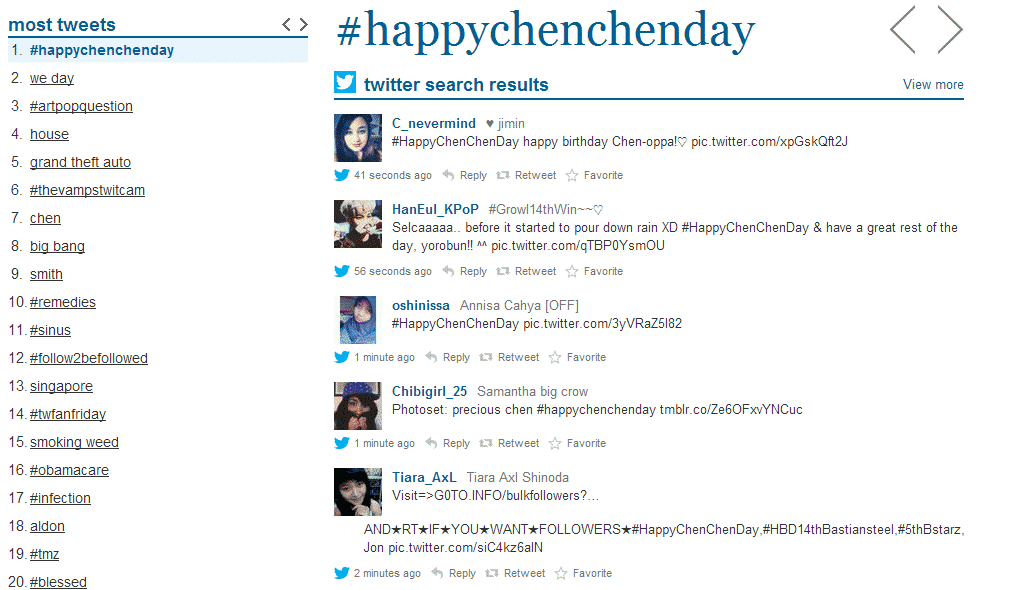 But by clicking on the hashtag, you’re probably not much more educated about what Chen Chen Day is than you were when you logged on this morning.

Chen with a birthday cake! maybe it was given by K-fans during Gwangju Fansign! cr: as tagged #HappyChenChenDay pic.twitter.com/ohvMGAtn7g

CHEN SHOULD KNOW ALL HIS FAN REALLY LOVE HIM AND HE HAVE SO MANY FAN AND NOT ALONE SINCERELY EXOSTANS #HappyChenChenDay cr: owner

Okay, so it’s somebody’s birthday … someone with a big fanbase … someone named Chen?

But given all the fanfare, it’s hard to believe that someone who is apparently as huge as Justin Bieber on the other side of the world has escaped our attention, right? Right. After all, we’re Americans! We know everything!

Alright, all ribbing aside (you know we love you, America), we looked up Chen so you don’t have to.

Chen is a member of the South Korean-Chinese boy band EXO. They debuted in 2012 and are more or less Eastern culture’s One Direction.

Interestingly, EXO is actually two groups. EXO-K performs and releases South Korean music while EXO-M does the same, but in China.

Anyway, Chen is a member of EXO-M, and September 21 is his birthday. “But that’s tomorrow,” you crow! Yeah but … nevermind, you’re right.