Chad Ochocinco, or Johnson, or whatever you’re calling yourself today, we need to have a talk. The writers here at SND really care about you and we’re only doing this because we love you. But enough is enough. It’s time for a Twittervention.

You’re addicted to Twitter. ADDICTED. And I don’t use that word lightly.

In the last thirty minutes you’ve sent 16 tweets. You talked about gambling, fashion, pedicures, and pretty women. You also mentioned that you had to start studying for your counseling session and frankly, it doesn’t look like you’re taking that seriously. 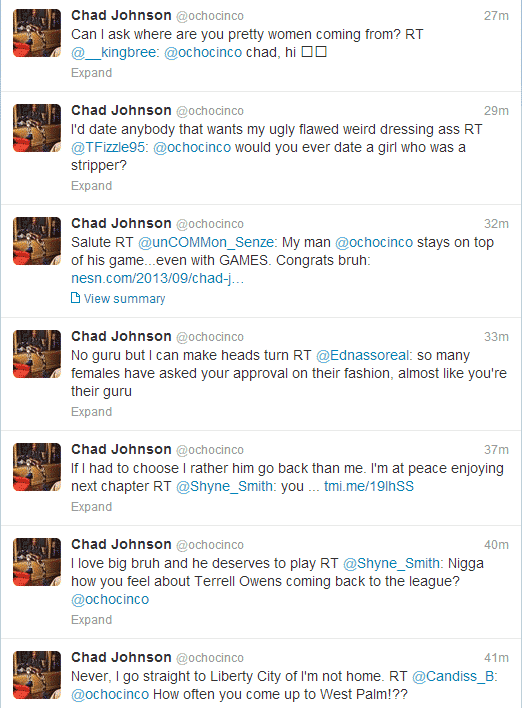 But we don’t want to judge. That’s not what this is about.

There’s still hope that you can get back in the NFL but that isn’t going to happen if you send out a Tweet every time you run on a treadmill.

OK, so that was pretty cool. And maybe more people would have seen that if they didn’t have to wade through the graveyard of your Twitter feed.

Don’t get me wrong, Ocho, you are one of the most entertaining people on Twitter. You communicate with your fans, you take them out to dinner, you even party with homeless guys that you randomly meet.

Homeless dude asked for a beer, I bought him a case of a 24 n a pack of Newports, we balling together fuck it… pic.twitter.com/xDUv5krSG5

But it’s too much. The staff of SND has to wade through the garbage of your account everyday to find a good sports article and we just can’t do it anymore. It saddens me to say this but you’ve been removed from our “Must Follow Athletes” list.

Don’t get discouraged, Chad. It’s not the end. We’re all rooting for you and we can’t wait to add you back to our list because you really can be a Twitter all-star. But for now, for your own good, step away from your computer and log out of your account.

You’re a Twitterholic, Chad, and it’s time for you to quit.

Please help spread the word and get our message to Chad Johnson. #OchoTwittervention