Reddit Tries To Figure Out Obamacare, Handles Debate Better Than...

Something interesting is happening on reddit right now (no, not Pirate Day). At r/explainlikeimfive, redditors have been trying to figure out Obamacare for the last six hours. Members are debating both persuasively and germanely, and to be honest, they’re conducting themselves with far more honor than those knuckleheads up on Capitol Hill ever do.

With all the talk of Obamacare (its at the center of yet another government shutdown debate right now) going on lately, redditor zapeter very boldy and honestly admitted that he doesn’t understand the controversial healthcare overhaul package very well, and would like to hear some opposing viewpoints.

Anywhere else, dangling something like that out there is pretty much a recipe for chaos, but not at reddit. Okay, sometimes at reddit, but not this time.

Instead, several users posted both Conservative and Liberal criticisms (yes, the latter exist) of President Obama’s signature legislation that sound more rational and salient than any you’ve ever heard on on cable news or from politicians on either side of the aisle.

Just check out this Conservative take on Obamacare:

Of course, both of those viewpoints are open to some scrutiny, and there was some debate. 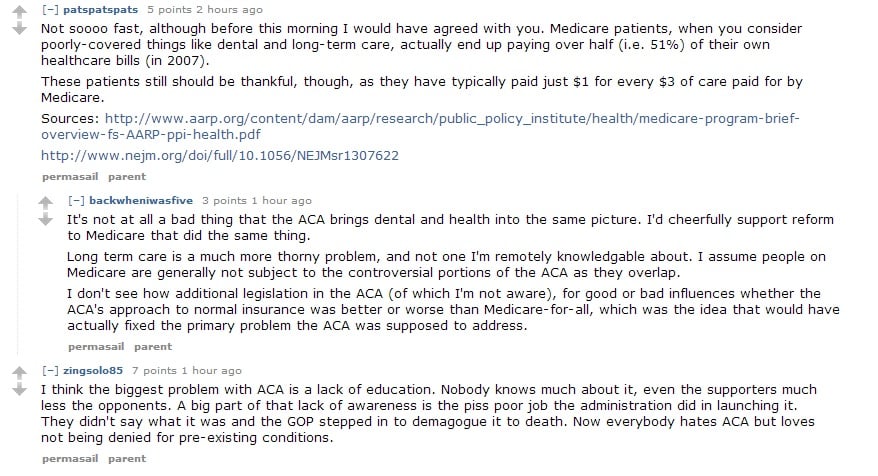 Look how nice everyone is playing with each other!

So if you’d like to learn more about Obamacare than the politicians behind or against it in a safe environment free from petty name-calling, faux-intellectual posturing, and party-line pablum, go check out the reddit ELI5 Obamacare thread here.