What In God’s Name Is In The Background Of This...

One of the weirdest photos going viral on r/pics right now is pretty mundane, except for the horrifying satanic figure staring our heroes down from the window. 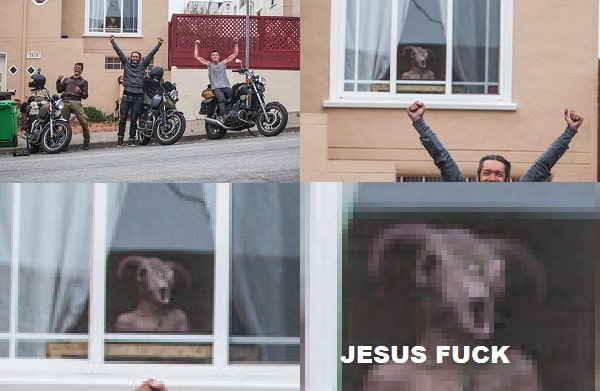 Luckily, this isn’t some demonic omen hanging over this group’s The Wild Bunch LARPing. It actually has a pretty simple explanation sitting all the way down at the bottom of the thread.

One of the adventurers pictured explained that it’s just a sculpture from artist Vanessa Rivera, whose art you can see here. He didn’t specify why they put it in the window, but our best guess is that the statue acts as sort of a Mormon scarecrow.

In any case, the boys had just returned from an epic journey during which they explored America across 10,000 miles and 28 states. It’s a pretty cool story, and you can read more about it here.