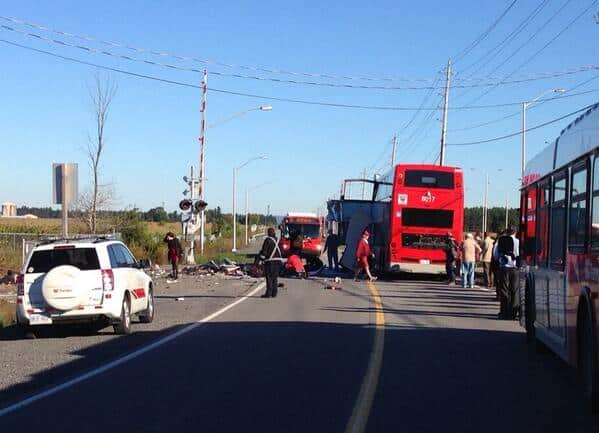 An Ottawa train crash in Canada has leveled a double decker bus at Fallowfield Road and Woodroffe Avenue.

Multiple people died in the crash according to fire department spokesperson Marc Messier.

News agencies and citizen journalists showed up on the scene of the accident and posted photos of the destroyed bus to their Twitter accounts.

One witness at the scene of the Ottawa train crash said the entire front end of the bus was “ripped off.”

According to Business Insider the accident involved a Via Rail passenger train and an OC Transpo bus.

At this time we don’t know how many people were killed or injured because of the accident. It is being reported that at least five people have died.

This is a picture of the scene of the crash involving an OC Transpo bus and a Via Train. #ottnews pic.twitter.com/baMCqDv70I

Wow, CBC reporting that ALL of Ottawa’s first responders are headed to fatal crash b/t VIA Rail train and bus http://t.co/2oV3Z6PMS4