One Direction Fan Kills Her Dog After Group Ignores Her...

A possibly psychotic One Direction fan allegedly killed her pet dog when the British pop group didn’t follow her on Twitter. 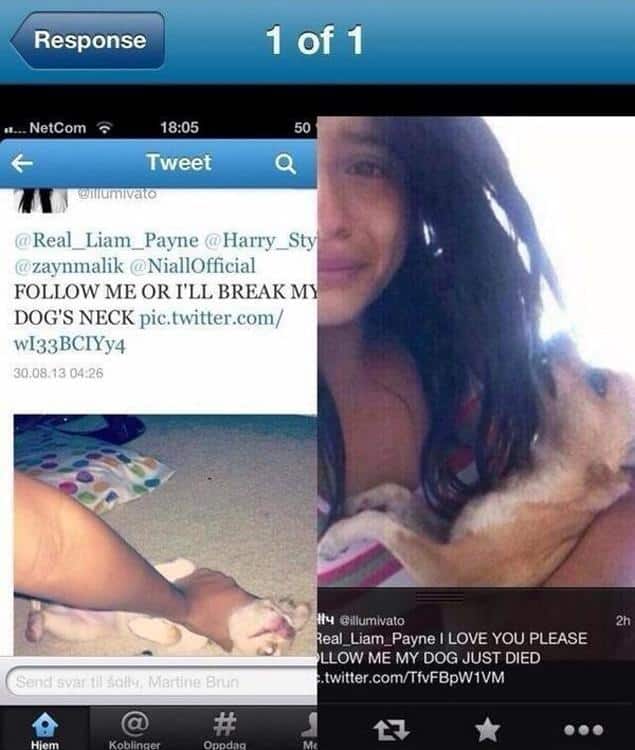 In her next tweet (also pictured above) she writes “@Real_Liam_Payne I LOVE YOU PLEASE FOLLOW ME MY DOG JUST DIED.”

The girl appears to be in tears as she pleads with Liam. We honestly don’t know if this is a hoax, a cry for attention or more likely a bit of both.

The sicko included a picture that showed her in tears as she cradles a little dog that appears to be dead.

Fans of One Direction quickly labeled the girl a psycho and urged Twitter to delete her account. One fan, Mya Fhya, started a Change.org petition to get her removed. The petition has received more than 2,500 signatures.

“She has pictures of animals in blenders, a dog with guns up to its head, a picture of her strangling (what looks to be her mom) […] basically implying that if she does not get more followers she will kill all of these beings.”

The girls real name and location has not been revealed.

One Direction has refused to respond to the crazy psycho’s attempted grab at attention.