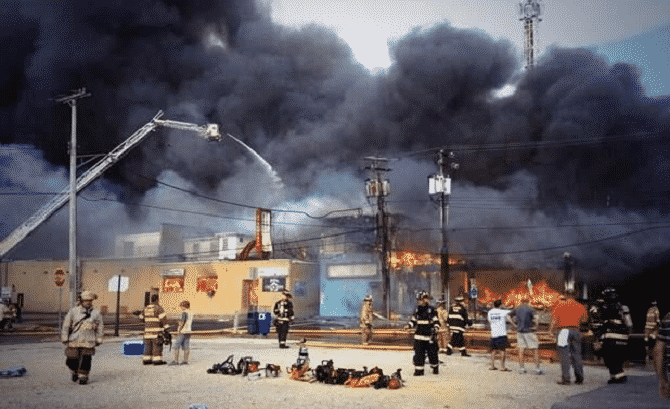 The Jersey Shore has spent the last year rebuilding after the destruction of Hurricane Sandy. And just as they were getting things back to normal, a massive fire in Seaside Heights has destroyed much of the Jersey Shore boardwalk.

Seaside Park’s police chief Francis Larken said that the fire started at Kohr’s Frozen Custard shop at about 2:30 this afternoon.

The fire rapidly spread down the boardwalk and has now effected more than three dozen businesses.

The fire has destroyed several businesses including FunTown Pier, the amusement park that was partially destroyed by Hurricane Sandy.

The Inquisitr reports that the heat of the fire can be felt for blocks and that several residents have been treated for smoke inhalation.

Authorities have been trying to remove sections of the boardwalk in order to stop the spread of the fire.

Firefighters are having a hard time controlling the fire because there is so many wood buildings on the boardwalk.

Governor Chris Christie’s press secretary Michael Drewniak said in a statement: “Pictures and video of the fire are startling and sad given what Seaside Park and neighboring Seaside Heights have endured with Superstorm Sandy. Governor Christie is deeply concerned and will get a first-hand look shortly at the scene, where he will be speaking further with Mayor Matthies and Mayor Akers and offering the state’s full resources and assistance. Our concerns and prayers are also with firefighters and first responders at the scene battling the blaze.”