Do you want to see Victoria’s Secret model Chrissy Teigen naked? If you do, you’re probably pretty excited for John Legend’s new music video for the song “All Of Me.” Director Nabil posted an image from the set and it features Legend, Teigen, and a little bit of nudity. 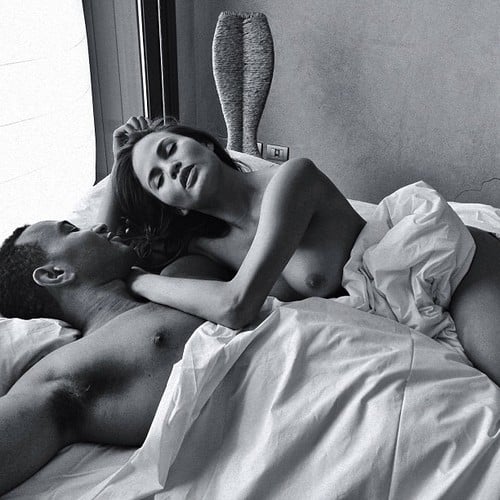 Legend sent out the photo saying that he loved Teigen’s “curves and all her edges.”

“Love your curves and all your edges.” Pic from the video shoot (slightly NSFW) @chrissyteigen @nabildo … https://t.co/d98yFMiQp1

Legend said that the photo was NSFW but Teigen was a little more cautious. She retweeted a link from Nabil saying that she doesn’t think she can get suspended for a retweet.

I figure you can’t be suspended from a retweet.

Legend and Teigen got engaged in 2011 and the singer said that he wrote the song “All of Me” specifically for his bride to be.

Teigen said: “The first line of it is ‘What would I do without your smart mouth,’ so if that’s not about me I don’t know what is.”

Legend added: “She loved the song and cried when she heard it.”

Here’s a lyric video for “All Of Me.”

Of course, this isn’t the first time that a nude photo of Chrissy Teigen has popped up on the internet. The supermodel sent out a topless photo on her Instagram account earlier this year. But come on, people, Teigen doesn’t have to be naked to get attention.

But she may need Skittles….