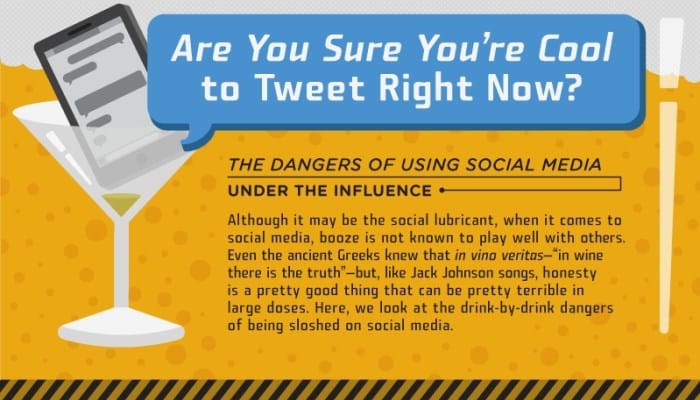 Social media has helped facilitate many awkward or downright terrible situations, and if you are drinking, it is best to probably step away.

A new infographic from Addvocate titled, “Are You Sure You’re Cool to Tweet Right Now?”, takes an amusing look at your social media “threat level” the more drinks you have.

One drink is harmless, and could result in typos or too many exclamation points, something that sober people make the mistake of doing all the time.

Two drinks may result in an increase of selfies, and three drinks bumps up the threat level to questionable.

After you get four drinks in, it starts to get sketchy, and may result in contacting your ex.

Even worse, five drinks could cause you send selfies to your ex, and with six drinks in your system, you need to stop using social media immediately.

Still thinking about your ex, drink seven could land you in the unemployment line after posting a hate-filled message to your company’s Facebook page.

Once you wake up the next day from a splitting headache, realizing you should have never logged on to social media, it is time to head on over to LinkedIn, and update your job history.

For anyone wondering who this MyPillow guy is, this article will tell you all about him and his role in Trump’s last struggle for power. It is almost second nature for the internet to find humor in many serious events in government. Could this be this generation’s way of coping? We don’t really know. Let’s… END_OF_DOCUMENT_TOKEN_TO_BE_REPLACED

Trump is the First American President who gets impeached for the second time. Trump’s second impeachment became a trending topic on Twitter after the terrifying terrorist attack on Capitol Hill on the 6th of January. Twitter is at it again, being flooded with memes and Twitter jokes surrounding Trump’s second impeachment trial. Americans are trying to… END_OF_DOCUMENT_TOKEN_TO_BE_REPLACED