Never forget. Twitter users have been posting images, thoughts, and prayers to the social networking site today to commemorate the tragic events of September 11, 2001.

R.I.P. to those who lost their lives 12 years ago. #NeverForget #September11 pic.twitter.com/AQP1z4K05X

The top three trending terms on Twitter are all related to September 11. God Bless America is also in the social network’s top 10. 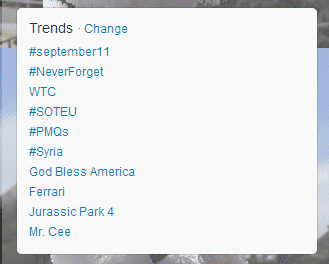 Celebrities, companies, and average citizens have been taking to Twitter to share their thoughts on the 12th anniversary of September 11. Some are praising the firefighters that lost their lives.

Every September 11, I feel humbled by — and awed by — the courage of the 343 firefighters who died that horrific day.

Some are paying tribute to the 3000 people that lost their lives during the attacks.

R.I.P to all the people who died on September 11, 2001. #neverforget pic.twitter.com/jisq7engyH

Some are remembering where they were on that fateful day.

September 11, 2001 was my second day of classes at @queensu. Will never forget the moment my roommate’s mom called with the news.

Others are looking toward the future to see what will grow from the ashes.

On Sept. 11, the #Auburn family takes a moment to reflect on the 12th anniversary. Here’s One World Trade Center: pic.twitter.com/39QGOEmdDi

Are you doing anything special today to commemorate September 11?

On September 11 2001 there was one American in space. This is the photo he took from the International Space Station pic.twitter.com/8XHRXnAmXm