Angelique Murphy Brands Restaurant ‘Misogynist’ For Refusing To Babysit During...

Today’s “most horrible person we managed to find on the Internet” comes from jolly ‘ole London.

User “AngeliqueMurphy” wrote a pithy review for an otherwise fancy and expensive South London eatery called The Dairy, and it is so mind-numbingly petty, I took no less than three breaks from reading it to step outside and weep openly for the fate of humanity while taking giant, intentionally suicidal gulps of cancer from a dozen unfiltered cigarettes.

Another neat detail, noted by The Braiser: Murph’s review isn’t actually a review appearing anywhere even mildly respectable, like Yelp. It’s her own rebuttal to Marina O’Loughlin, The Guardian’s resident food critic, who reviewed the joint.

Here it is, in all its head-banging-against-desk glory: 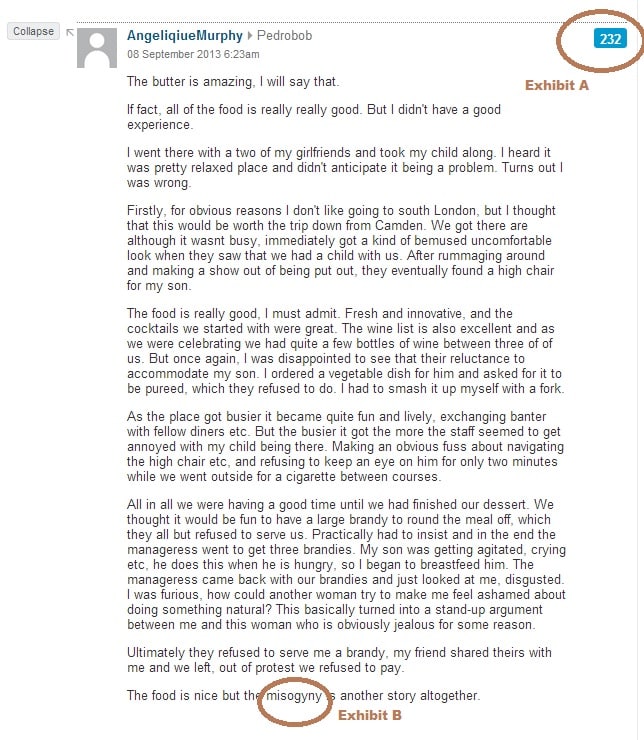 As you can see from Exhibit A, Murph’s comment was incredibly popular. Thankfully, she doesn’t seem to serve as an accurate cultural sample of hypothetical North London snobbery. Here were some of the responses:

First of all: Wow, Brits are far classier Internet commenters than Americans. Second, user SonOfTheDesert responds directly to Exhibit B in Murph’s original review and illustrates a beautiful point about the overuse of pejorative labeling. Remember, Internet: Every time you carelessly assign these words, they lose a little bit of their power and might not be there when you really need them someday.

Lastly, you’ll notice that user RogerApex brings conspiracy into the story, and he’s not the only one. The Dairy actually responded to the conspiracy rumor on Twitter:

@lisamarkwell @MarinaOLoughlin no spoof, although the not paying part I am now looking into and looks like someone is in trouble!

And showed an awesome sense of humor about it later:

You can check out the comment thread in its entirety over at The Guardian. Try not to lose too much faith in humanity, or at least London. People are only really like that in uncomfortable measure in America.