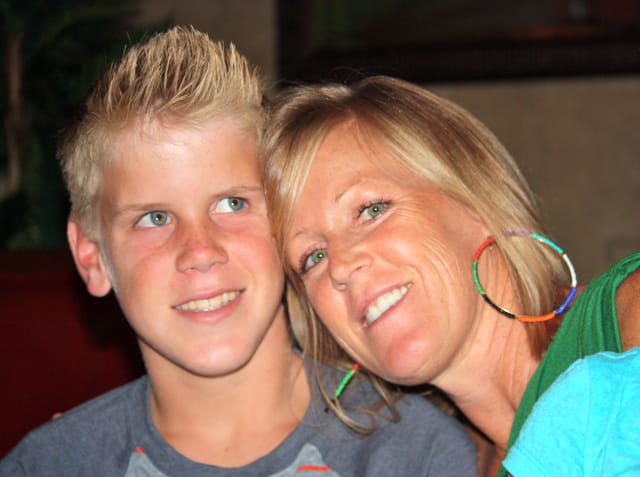 Kim Hall’s blog post “FYI (if you’re a teenage girl)” got a lot of Facebook, Twitter, and other social shares — first by those who agreed, and second in a wave of criticism that was as biting as it was apt.

If you haven’t read Hall’s stinging rebuke to teen girls on social media, laying the blame for male desire squarely on their shoulders, we won’t tell you to go read the missive — which has caused a lot of upset in the social media realm.

In it, Hall decorates a post with her shirtless sons flexing their teen muscles (an image she’s since taken down after hundreds of mentions of the blinding hypocrisy) and rages against pajama clad teenagers clearly not wearing a bra. (Because everyone wears a bra to bed, apparently.)

These braless hussies, she imagines, are poisoning the sinless “Hall boys” with impure thoughts, and Kim goes on to explain that anyone not wearing a bra or seductively posing in Hello Kitty PJ bottoms is a social media persona non grata in the Hall house.

Because, you see, the whole famdamily gathers around the table to hunt Facebook sluts at dinner. Really.

“And now – big bummer – we have to block your posts. Because, the reason we have these (sometimes awkward) family conversations around the table is that we care about our sons, just as we know your parents care about you.”

“I know your family would not be thrilled at the thought of my teenage boys seeing you only in your towel. Did you know that once a male sees you in a state of undress, he can’t quickly un-see it? You don’t want our boys to only think of you in this sexual way, do you?”

Many many many excellent takedowns of Hall’s hysteria have followed the toxic blog post, but The Belle Jar draws a direct line between casual parental slut shaming, blaming teen girls for their allure, and suicide. She explains:

“When I read Mrs. Hall’s letter, the first people that I thought of were Amanda Todd, Retaeh Parsons, Audrie Pott, Cherice Morales. In each of these instances, photographs of the girls that either pictured them various states of undress, pictured them being sexually assaulted, or both, were circulated online. In each of these instances, the girls committed suicide after enduring bullying and slut-shaming both online and offline.”

Kim Hall’s shirtless teen images have been taken down, but the original post remains with its upsetting message: you should have known better. First and foremost, your concern is how males perceive you, and if you break one unspoken rule before you even get a chance to play the game, you deserve all the shame and pain that comes your way.

What did you think of the Hall boys and their permissible objectification of their classmates?

Presidential pardons are one and many in the history of the US. There are many times when US Presidents granted reprieves for their citizen’s misdeeds. The US President may grant a pardon for any individual, including himself, for any crimes done against the country and its citizens. This issue of Presidential pardons has been trending… END_OF_DOCUMENT_TOKEN_TO_BE_REPLACED

President Biden has tapped Rachel Levine to be his assistant secretary of health, making her the first publicly transgender federal official. In 2017, Democratic Gov. Tom Wolf appointed Levine to her current post, making her one of the few transgender persons serving in appointed or elected positions countrywide. Biden said in a statement: “Dr. Rachel… END_OF_DOCUMENT_TOKEN_TO_BE_REPLACED

The minimum wage hike has always been an issue in the US for the past decades. With only a few hours before Biden gets inaugurated as the President of the United States, people are excited for all his promises to take place. One of these is his plans to raise the minimum wage of workers… END_OF_DOCUMENT_TOKEN_TO_BE_REPLACED