Mom Finds Out Her Son Is Gay On Facebook, Writes...

It might be a little awkward to find out that your child is a homosexual from Facebook, but one mom was pretty classy about it when it happened to her.

Michelle Conway McClain found out a few days ago that her son, Zach Gibson, is gay. He had shared the news with his friends on Facebook, though he hadn’t personally broken the news to his family yet. Before he could, Michelle saw the post and wrote him an encouraging missive, which she tacked on his door. 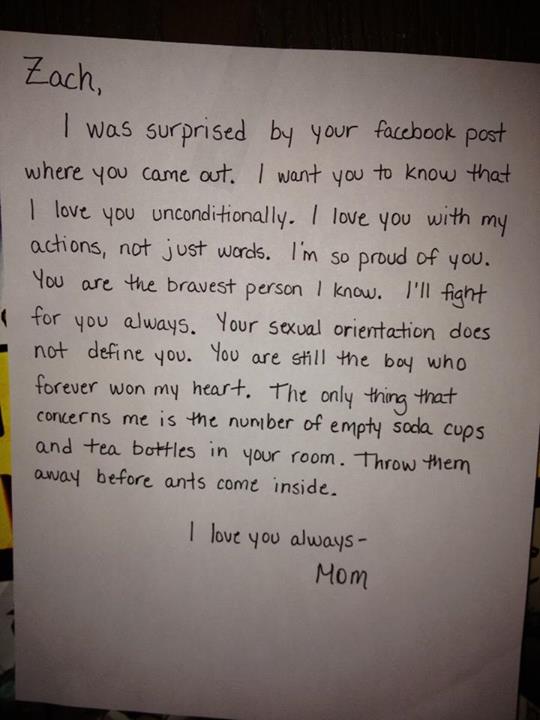 She decided to put it on Facebook, where a few encouraged friends asked if they could share it as well. After that, the post went viral and earned heaps of praise as a positive example of how parents deal with their children’s struggles with sexual identity.

After receiving such positive feedback, Michelle posted an update to her page Wednesday night. 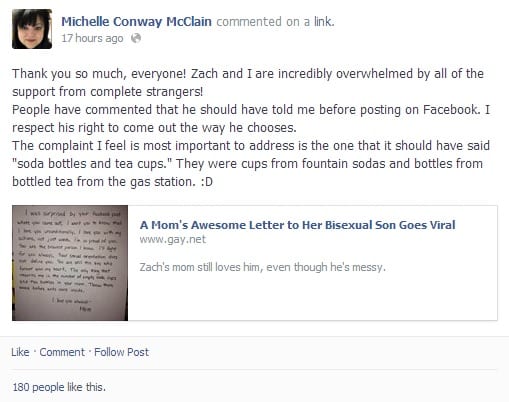 Stories like Michelle and Zack’s have become increasingly common over the years. Back in March, one dad overheard his son’s plan to come out to him, but cut him off with a note tacked on the refrigerator:

“I overheard your phone conversation with Mike last night about your plans to come out to me,” it reads. “The only thing I need you to plan is to bring home OJ and bread after class. We are out, like you now. I’ve known you were gay since you were six, I’ve loved you since you were born.”

You can check out Michelle Conway McClain’s letter to her gay son here, and leave her a note.