Corey Feldman Bullies His Birthday Party Bully While Complaining About...

by Dan Evon 9 years ago2 months ago

Let’s get caught up on a few things.

Corey Feldman recently had a birthday party and he invited Vice writer Jamie Lee Curtis Taete to attend the festivities. And that, by the way, is a prestigious invitation. Feldman charges $250 to get into his parties … unless of course you’re a woman. In that case you have to be pre-approved for admission by Corey and then put on some lingerie. 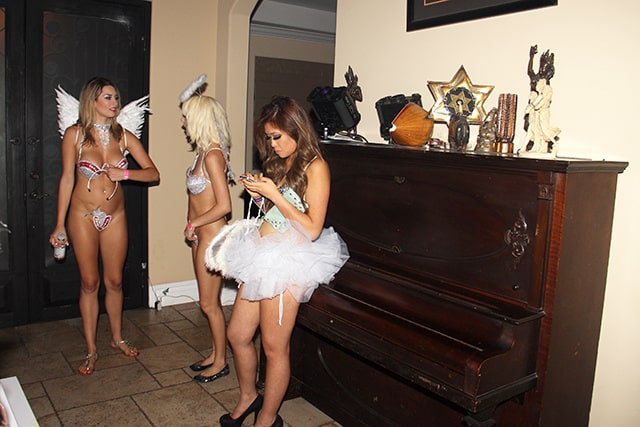 Anyway, Jamie publishes his article complete with pictures. And it isn’t a pretty sight. The women look bored, the house looks empty, and the guests look like they’d rather be somewhere else.

Feldman approved of the article (Jamie wasn’t allowed to publish the article until it had the child star’s approval) but now Corey is having second thoughts. He started attacking Jamie on Twitter, calling him a liar, and ultimately branded him a cyberbully.

And Feldman may be right. I mean, Jamie’s piece was definitely written in jest. It was full of sarcasm and was clearly an attempt to show the child star’s desperate attempt to be a big shot.

But Jamie is a reporter and maybe that’s all there was to report.

The Vice author writes: “There is no possible spin you can put on a $250 per head birthday party thrown by a former child star in an unfurnished, beige McMansion in the suburbs, surrounded by women in their underwear and “happy 22nd birthday” signage, to make it seem anything other than utterly bleak and miserable.”

Corey Feldman has every right to be unhappy about the piece (except for the FACT THAT HE APPROVED IT) but here’s where things get weird. Feldman put out a press release condemning cyberbullying and then proceeded to taunt Jamie on Twitter.

He called him a bottom feeder.

BOTTOM FEEDERS LIKE @JLCT WHO GO OUT OF THEIR WAY TO DESTROY GOOD PPL NEED TO B OUTED SO THEY CAN’T TAKE AFVANTAGE OF MORE GOOD PPL!! RT!

Im really sad that there r so many liars n haters n the world. This online site went out of the way to make beautiful ppl look bad..so sad!

And accused him of harassment.

Imagery intentionally. The good news is they were @ my house and we hav video footage of them setting me up, harassing. More 2 b revealed.

Feldman said in a press release: “Unfortunately, we have grown into a society whose belief system holds to bring down rather than to build up. Bullying is present in schools, homes, professional environments and online (cyber bullying), and here is a case no different from just that. I can take criticism, but what people are saying online as of late is far beyond that … It takes a lot of balls to put yourself out there in the hot seat, so I encourage everyone to not be afraid of what others will say or think. Move forward and ignore the haters.”

The press release, by the way, wasn’t written specifically to condemn bullying. The press release also made sure to mention that Feldman’s music career, his latest single and the fact that he’ll have his “first lead in a U.S. theatrical release in over a decade.”

OK, Now For The Backlash

Dr. Chuck Williams, Drexel University Clinical Professor and Director of the Center for the Prevention of School-Aged Violence, told Fox News: “This is horrible! I can’t believe that Corey would utilize such a serious issue to gain traction for his ‘comeback.’ If this is what I think it is, Corey should be ashamed and every national bullying organization should demand he apologize.”

Corey Feldman may have been the victim of bullying. He may have been subject to mean internet comments. He may have even had an awesome birthday party that Vice failed to capture. You can debate that amongst yourselves.

But what we do know is that Feldman failed to rise up above his detractors and jumped right down into the bullying pit with them. But hey, at least he got to promote his upcoming album in the process.