by Dan Evon 9 years ago9 months ago

Vodka Samm became an internet folk hero / warning to Twitter users this week after she bragged about blowing a .341 during a breathalyzer test.

But the Iowa undergrad’s time in the internet spotlight was short-lived as Vodka Samm, aka Samantha Goudie, has vanished from Twitter.

It’s unclear if this is some sort of punishment from the University of Iowa or maybe Vodka Samm’s parents have banned her from the internet. Of course, there’s also the possibility that Goudie discovered the flip side of Yolo and decided that life was too short, and could become exceptionally shorter, if she continued to guzzle down vodka.

And that really isn’t an exaggeration. A .341 BAC is dangerously close to fatal levels. Clemson University’s Redfern Health Center website says that the lethal limit falls betwen 0.40 percent and 0.50 percent.

Goudie didn’t reach those levels but a .30 BAC isn’t exactly healthy. The website reads that a .30 “you’re probably in a stupor. You have little comprehension of where you are or what’s really going on around you. You may suddenly pass out and be difficult to awaken. (At .35 percent) you may stop breathing.”

Goudie escaped death by vodka last weekend and in the process she gained thousands of followers. She also became a t-shirt. 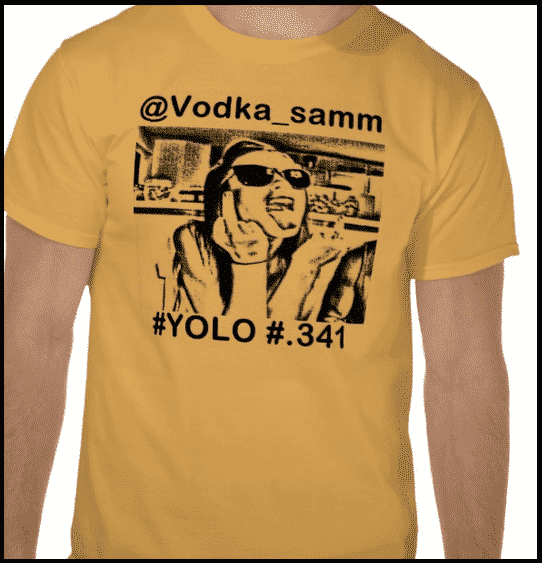 Vodka Samm has vanished from the internet but you can still relive some of her dangerously beautiful words of wisdom below.

Goudie defended herself on Twitter shortly before deleting her account saying that she manages to gets good grades despite the fact that she likes to party. In Goudie’s words, she’s like every other college student.

What do you think? Is Vodka Samm a folk hero for the internet age? Or a warning sign to future college students?