Are you ready for a good ol’ fashion internet murder mystery? Online investigators went nuts this weekend after a bizarre murder confession popped up on the site PostSecret.

The website allows users to share their personal secrets with an anonymous audience. Recent posts have included extra-marital affairs, suicidal thoughts, and grade school guilt. Oh, and a murder confession.

PostSecret added a photo over the weekend of a map along with the message: I said she dumped me, but really, I dumped her (body).”

An arrow below the message pointed to the location of the supposed dead body. The map was posted to Reddit where a couple of internet sleuths determined that the map was of Chicago’s Jackson Park. 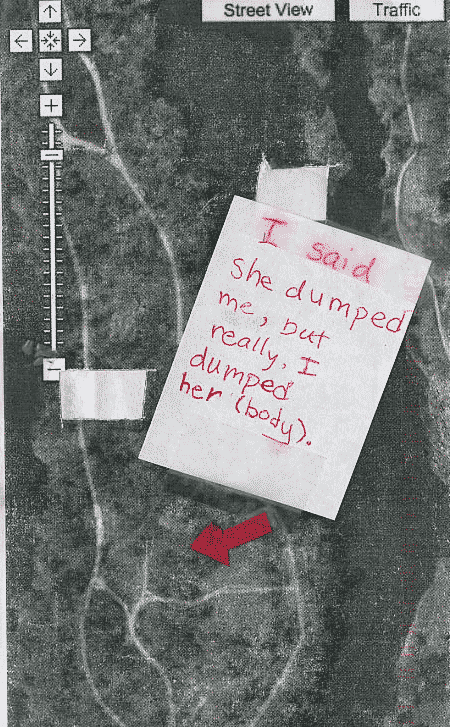 How old is the map? Was there ever a body found at Jackson Park? What about unsolved Chicago murders?

Internet investigators poured over the details while one (good job citizen) alerted the police. The Chicago Tribune reports that officials searched the park over the weekend and didn’t find any body.

Chicago Officer Daniel O’Brien, a police spokesman, said: “They said they had found this cryptic message on a website.”

O’Brien said that the PostSecret Murder confession was handed off to detectives who will decide if there is any reason to open a wider investigation.

Eric Larson, an online detective who has been following the PostSecret murder case, said: “Either a really bad person killed somebody or a less bad but also bad person is making a joke and wasting time claiming that they killed somebody … Either way, it’s bad. But given the choice … I hope it’s a hoax.”

The PostSecret Murder confession ended without a body and, thankfully, without any false accusations.

PostSecret founder Frank Warren was criticized by some after he tried crowdsourcing information from Reddit.

I have tried to share all the information I have on the top secret this week. Can we ask reddit to help identify the location? #postsecret

Reddit has done some great online work in the past but they have a shaky track record when it comes to real world investigations. Many of the comments on the Reddit feed were deleted by moderators on Sunday to ensure that internet investigators didn’t take their detective work too far.