Golf Channel Tweet Tees Up Controversy Over ‘I Have A...

On the 50th Anniversary of the March On Washington, many people are pondering Martin Luther King’s “I Have a Dream” speech.

What did it mean in 1963? What does it mean today? How far has America come since the civil rights movement? How much farther do we have to go? And, possibly the most important question of all: Would Martin Luther King use a traditional or a stomach putter if he was golfing today?

The Golf Channel sent out a tweet today asking its followers what they were dreaming of today. 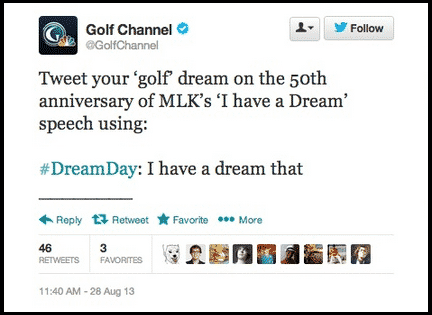 Some golf fans played along with the Golf Channel while others were a little offended. They said that the tweet was demeaning, offensive, and distracted people from the importance of MLK’s “I Have a Dream Speech.” Some even saw the tweet as hypocritical since some golf clubs are still “exclusive” and don’t allow women.

@Holdenradio @GolfChannel I have a dream that super exclusionary sports outlets won’t trivialize a major moment in civil rights.

@GolfChannel #DreamDay: I have a dream that the Golf Channel won’t do any more tweets as ludicrous as this one.

The Golf Channel deleted the tweet and apologize to its fans saying that the message was inappropriate.

Our earlier tweet was inappropriate. The intent was to celebrate this important date in history we regret we failed to meet that standard.