So you want a bit of “strange” on your Twitter feed each morning? Though there are a ton of weirdos on social media, some of the best standouts come from the celebrity world.

I already know what you’re thinking: “AMANDA BYNES IS CRAAZY I FOLLOW HER LOL.” Salient observation, reader! But everyone knows that Amanda Bynes is a nut right now, her Twitter weirdness is literally 44% of our traffic.

We want to shine a light on the darker, hidden corners of the celebrity world. We’re not looking for “lol crazy,” we’re looking for scary, aggressive, completely-detached-from-reality crazy. We want your batshit, tinfoil-hat wearing uncle who won’t speak to you about the government within five feet of your laptop or television.

He exists! His name is …

The Buse has kind of fallen out of the zeitgeist lately, but thanks to his 100% verified Twitter account, you can wax nostalgic for Celebrity Apprentice every single day! Join his 100,536 followers for daily advice on weight loss:

Your honesty hurts me and loves me too and that’s the truth.

You can talk LOUD but LOVE is louder without making a sound in having to talk. — Gary Busey (@THEGaryBusey) July 23, 2013

Jose Canseco was a great baseball player because of drugs, and he’s great to follow on Twitter for probably the same reason. He’s one of the meanest sumbitches on Twitter, and when his feed isn’t a domestic dispute playing out in real time, he entertains his 519,872 followers with his perversions:

This is The face I make when my girl @ModelLeila works out with me. #distraction pic.twitter.com/wUm8sqiHfl

Lessons on gravity and the origins of the earth:

Gravity had to be weaker to make dinosaurs nimble — Jose Canseco (@JoseCanseco) February 19, 2013

Kirstie Alley is a Scientologist. That should probably be the end of the discussion, but just for fun:

what movie have you seen the most time? ……….. Mine are Bridget Jones and Gladiator — Kirstie Alley (@kirstiealley) August 23, 2013

Those are good. I like Shawshank Redemption, but the movie I seen the most time are probably Teenage Mutant Ninja Turtles or something.

Well, you know I had a lot of time as a kid to watch kid movies … wait, what?

taking years off my face and boobs, yes boobs with my @BioxideaUSA face and boob masks then going to bed. night chitown

Can’t do Texas without the beef. It’s just udder nonsense not to.. you see what I did there?? Bwahaa #madMicko pic.twitter.com/DEkqy1WEMt — Courtney Love Cobain (@Courtney) August 4, 2013

To be fair to Courtney Love, her Twitter more often than not hosts bouts of relative calm than crazy these days. It’s really a shame you can’t follow her old handle @CourtneyLoveUK, because that’s where all the good stuff was at.

Juliana Hatfield is an American guitarist/singer-songwriter who achieved some fame in the indie rock scene. She’s still around (going back to school, actually), and her tweets are absolutely nutty. She’s actually a really entertaining follow. She seems to have that quiet, unsettling tone of a lonely cat lady talking to a brick wall, but she has over 12,000 followers that soak up her strangeness. 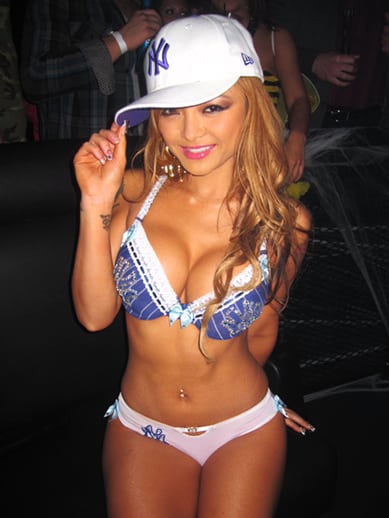 Poor Tila Tequila, who honestly believes that she can create Kamehame-ha’s with her hands. Whether it’s the Illuminati, Biblical eschatology, or alien conspiracy, Tila is always a hit. We’re cheating a bit on this entry because Tila Tequila’s official Twitter handle no longer exists. Follow her on Facebook instead. It’s a hoot, I tell you.