Twitter is a great way to stay up to date on your favorite celebrities, and while many eventually turn their backs on the social network very publicly (Alec Baldwin, Charlie Sheen, James Franco) others have left their accounts active without update for months … even years.

These celebs seem to have completely forgotten that they even have a Twitter account, leaving them active but silent like derelict cathedrals, having vanished without a trace. They are:

The Gos is probably the most famous example of a celebrity who just abandoned Twitter. The account is verified so we know it’s him, but you can tell he didn’t put a whole lot into it when he joined back in March 2011. He has posted 11 tweets, and though he still has over a million followers, he hasn’t updated once since April 2011:

Actor Lee Thompson Young, star of Disney’s The Famous Jett Jackson and the TNT cop drama Rizzoli Isles, tragically committed suicide earlier this week, but his Twitter account has been silent since Christmas 2011. The account is unverified, but we know it’s him because he traded messages with co-star Angie Harmon’s verified account on a handful of occasions before apparently leaving altogether. This was the late actor’s last tweet:

Merry Christmas everyone! Wishing you all peace and happiness

Though the Dave Matthews Band Twitter account is still active, the 46-year-old hasn’t used his personal verified account since 2010, leaving us to wonder where did he go with his long face pulling down. He was pretty active for a while, too. His account shows that he has sent over 2,000 tweets, but he abruptly stopped in October 2009, only logging in one more time almost four months later. Here’s his last tweet:

Actor Jason Segel has nearly 2.5 million followers on Twitter, but hasn’t made a peep in over a year. The 33-year-old How I Met Your Mother star is another example of a celebrity who just didn’t seem to know what to do with the microblog, and it’s evident in his tweets. He tried a few selfies and pics of what he’s been up to (beer), but ended up just promoting his upcoming films and television appearances before abandoning his account in April 2012. Here’s his last tweet:

Only 3 days until the 5 Year Engagement! Go see it this weekend please. Guaranteed to be an amazing date movie for all! https://t.co/vqLHAgjq

Comedian and LGBT rights activist Rosie O’Donnell doesn’t have a personal Twitter account, but apparently started one in 2009 to promote her Sirius XM radio show The Rosie Radio Show, which ran from 2009 to 2011. She either forgot about her Twitter account or decided not to bother with it, but made sure everyone knew exactly what it was for with her solitary tweet:

This is a placeholder for the Rosie Radio Show, on SIRIUS-XM. Show starts November 2nd. Sign up soon..

Comic book writer and artist Frank Miller is best known for Sin City, The Dark Knight Returns, 300 and making Daredevil cool. But this gritty, award-winning comic bookist hasn’t used it since October, 2011. Come to think of it, he hasn’t really done anything since 2011. Should … should someone maybe go check on him?

All right — I must depart again. Not because I want to fall asleep watching #Gunsmoke but because tomorrow is a big day.

Okay, Gwen Stefani doesn’t completely qualify for this list, but Dave Matthews was only absent from Twitter for 24 days when Gawker raised the alarm. If anything, the No Doubt frontgirl seems to have just a mixed interest in Twitter, with a measly 400 tweets for nearly a million fans. Additionally, she seems to just dump 5 to 10 tweets on her fans in one day and then disappear for weeks or months at a time. Her last tweet was June 1, 2012, so we’re apt to dub her account “loosely abandoned.”

British crooner Adele is another fickle Twitter user, having bailed on the microblog in 2012 after inexplicably receiving death threats over her newborn baby (seriously, guys?). Her account remained active but delinquent, and she now only updates it sporadically, mostly to brag.

Like her How I Met Your Mother co-star, 31-year-old Cobie Smulders still hasn’t really cracked this Twitter thing. Another “loosely abandoned” account, Robin Maria Hill scarcely tweets and even when she does, it’s usually to promote some kind of appearance. This Twitter account is probably still active only at the behest of her manager.

I have to confess, I have no idea if this account really belongs to Christian Bale or not. It says “official,” but it’s also unverified, but then again it doesn’t seem like he was around long enough to even properly set it up. There are only two tweets and no Batman background or anything.

Of course, it’s definitely possible that Christian Bale has just been using his other Twitter handle this whole time. 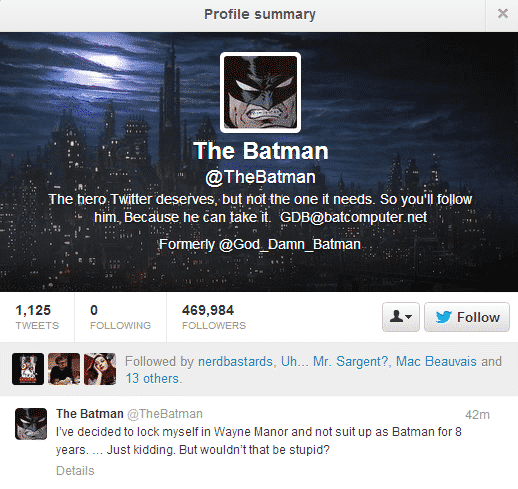 Do you know of any other celebrities who just abandoned Twitter?