Twitter is currently testing a new feature that is sure to please online publishers. Called “Related Headlines,” when you click-through to view a specific tweet on its permalinked page, it displays sites that have embedded that tweet.

As a good example, Twitter shared a screenshot of basketball player Jason Collins’ tweet posted shortly after revealing he was gay. 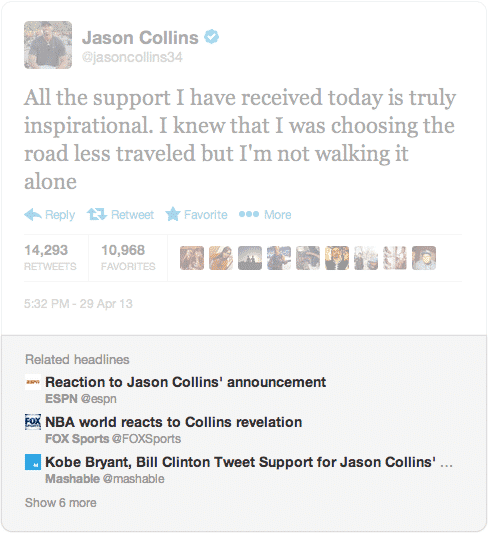 Directly below the time and date sent, a gray box appears displaying the top three websites that embedded Jason’s tweet.

For online publishers, Twitter makes it clear that Related Headlines only appear on a tweet’s permalinked page, and not on embedded tweets themselves.

As far as how the social network ranks or determines which articles to include, is unclear. However, one could assume that articles with an embedded tweet that have a large amount of shares, would get prime placement.

Twitter is rolling out Related Headlines starting today, and hopes to offer its users more context that simply can’t fit into 140 characters.