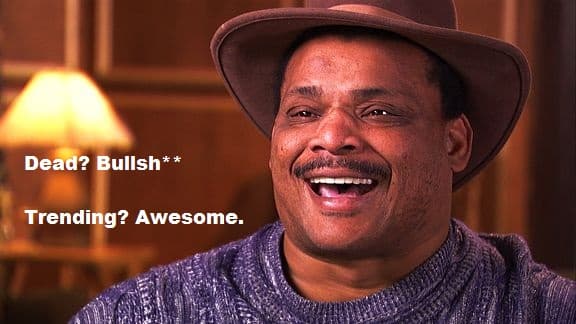 William “Refrigerator” Perry was reported dead on Twitter Wednesday, prompting the retired defensive lineman to clear up rumors of his health on Twitter.

I heard about the rumors that I passed away online. #SMH. Just wanted to let everyone that they are not true and Im doing fine. Thanks guys!

But people are having a hard time parsing this death hoax because it’s not a death hoax in the way we’ve come to expect (and shame) them.

Rumors of Refrigerator Perry’s death started going around Twitter early Wednesday, but it didn’t really start picking up steam until the Twitter account @ClemsonTigerNet announced it. They quickly took the post down, but they have thousands of followers and are a pretty influential handle for all-things Clemson, so a lot of people took the report as legitimate.

They later clarified with a mea culpa on their website, explaining “There were several reports on Twitter this morning of William Perry’s passing, but it appears it was [the death of] another William Perry that caused the confusion.”

See, there are two kinds of death hoaxes to watch out for. The first, we’ve covered extensively here. That’s when a celebrity is killed off with a false report on purpose by online famewhores seeking pageviews without really earning them by publishing good content.

The other kind of death hoax is more accidental, and caused by the “citizen journalists” of social media and the blogosphere. They see in the paper that someone famous died and think “hey, there’s only one William Perry I know of, and thus, only one William Perry in existence” and start the rumor mill by happy, earnest accident.

We’re not as hard on the latter, and usually give the benefit of the doubt in those cases.

Just this week, lawmakers approved a bill establishing the District of Columbia (D.C.) as the 51st state of the United States of America. This is after multiple calls and protests from the citizens to finally consider D.C. as a state.  However, the bill is not out of the woods yet as it faces multiple oppositions… END_OF_DOCUMENT_TOKEN_TO_BE_REPLACED

John Bolton’s new book entitled ‘The Room Where it Happened’ had been stirring up quite the attention since it was announced for release last week. Officially released only June 23, the new book seems to threaten the Trump administration as there had been moves to get it unpublished. The request was later on turned down… END_OF_DOCUMENT_TOKEN_TO_BE_REPLACED

Learning about the Juneteenth Holiday The Juneteenth holiday, celebrated every 19th of June, is a commemoration of the liberation of enslaved African-Americans in the United States. It was on the 19th of June 1865 when Union Army General Gordon Granger announced General Order No. 3 in Galveston, Texas officially emancipating slaves in the entire state.… END_OF_DOCUMENT_TOKEN_TO_BE_REPLACED