Kendrick Lamar claimed four of the top 10 trending terms on Twitter this morning due to his new verse on Big Sean’s song Control. 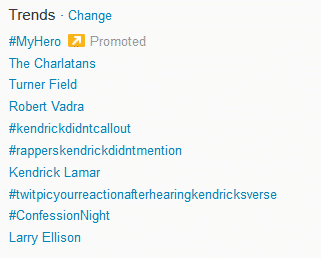 So what’s the big deal? Well, Lamar basically called out every other singer working today and told them that he was the king (of New York and California) and that he was working to steal all of their hardcore fans.

But Lamar’s verse really wasn’t all that intimidating. Or creative. Or good.

The singer basically says “these guys are all my friends and are great singers but I would really appreciate it if some of their fans would listen to my music.” DAMN! That’s some nasty stuff right there.

After the song dropped last night Twitter lit up with comments. Most of which were making fun of Lamar.

https://t.co/5KHOQLNE2w RT @LupeFiasco: We all rap. Some of us just rap to rap but others of us RAP.

Big Sean heard Kendricks verse and was lik this pic.twitter.com/JG3GN5czL1

Of course, some people saw it as an epic throwdown. British GQ actually called Kendrick Lamar’s verse the greatest of 2013. That might be a stretch right there but it definitely had some fans.

What did you think of Kendrick Lamar’s verse? Did he call out everybody in the rap game? Or did he politely ask for more fans?