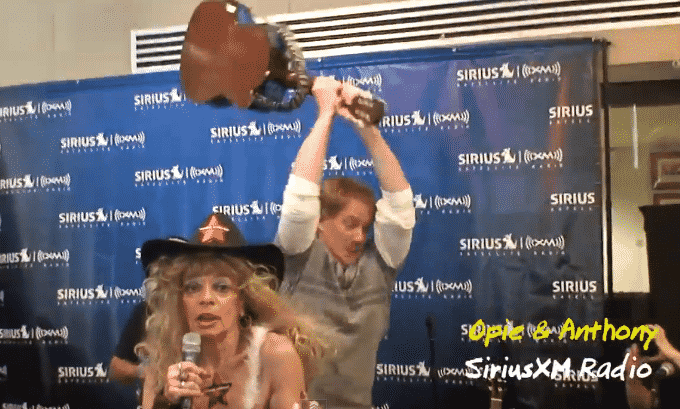 In 2007, Opie and Anthony took a homeless man’s cake and smashed in on the ground. On August 11, 2013, they felt the internet’s wrath for that prank.

Opie posted the video to his YouTube page today because one of his fans requested it. But that was probably a mistake. The video eventually made its way to Reddit where a few thousand users decided that it was enough evidence to officially declare Opie to be an asshole.

The video features shock jock Opie and a bunch of other people standing around a homeless man and his cake. The man offers the tasty treat to his new friends but instead of accepting the man’s offer, they decide to destroy his cake.

But don’t worry. Once it’s all over they throw some money at the man.

One user writes: “The giggling idiots make me rage. This is what I expect from teenagers in a shop knocking over displays, not ‘professional entertainers.’ ”

Shortly after the video of Opie smashing a homeless man’s cake a second video was posted to Reddit showing the radio host smashing a woman’s guitar. Unsurprisingly, the comment section quickly filled with remarks by disgusted redditors.

One user writes: “This shit is fucking nauseating and the asshole deserves all the hate he gets from it.”

Opie defended the videos on Twitter saying that all of his haters were “misinformed.”

Figured out why there’s an all out attack by uninformed losers. My vid was posted on @reddit as This Guy’s An Asshole http://t.co/Uql4t7mRPt

I’m simply amazed that I’m getting a sound thrashing from @reddit for a video that’s 7 YEARS OLD!!! Did I step into a time machine? — opie radio (@OpieRadio) August 11, 2013

Opie admitted that he “was not proud” of smashing the man’s cake but he has a proven track record of dickish moves. Since the original video was posted to YouTube, several other links have been shared on Reddit featuring Opie pulling questionable stunts. Like the time he stole a woman’s wig. Opie is a shock jock who has made a lot of money doing, well, shocking things. But that doesn’t mean that he won’t suffer from the current internet backlash.

I think we can officially call this a witch hunt @reddit I think I’ll go back to making cute kitten videos. #SadFace