Yevvo is a new live streaming app available for iOS devices, and offers an experience similar to popular services Livestream or Ustream.

The app is geared towards Twitter users, allowing you to notify your followers whenever you go live.

Depending on one’s connection, it supports streaming of HD video, and once a live broadcast is over, the user who started it can save the entire stream directly to their device.

While the app is optimized for the iPhone 5, you can also broadcast live from an iPod Touch or iPad.

According to Ben Rubin, CEO of Yevvo, the company hopes to push live video technology forward, and create an interactive community around it.

Helping to fuel interactivity, users are able to easily discover live broadcasts happening in or around specific locations. You can follow other users, and also places or locations.

The interface itself is very clean, and when you go to watch a live broadcast, you’re able to see how many others are watching, as well as comment.

An icon resembling Twitter’s retweet button lets you share the broadcast with your followers, and clicking a heart icon means you “like” it.

There are currently no plans for an Android app, and since being founded in March 2012, Yevvo has received $500,000 in funding. 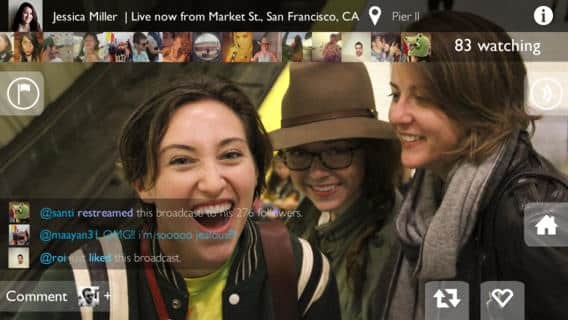