If you spend more than 10 seconds on Twitter you are well aware of Twitter trolls. They are the people who post mildly annoying messages and often flame your completely normal conversation threads with racist, ignorant, or just plain stupid comments.

Recently a group of Twitter users got revenge on one of those Twitter trolls. Someone found the Twitter trolls easily accessible person information and threatened to give everyone the address for the users mom.

The Irish Times reports the case of historian Mary Beard who made an appearance on Jeremy Vine’s BBC Radio 2 show. The publication notes:

“Somebody called Oliver Eric Rawlings . . . tweeted that Mary was a “a filthy old slut” and then went on to make remarks about her body that we won’t repeat.”

Beard is often attacked for her views and she likes to take a moment to retweet attacks against her in the hopes that a friend or family member of the Twitter troll will see the message.

@TheJeremyVine came to her defense to which Oliver sent the following message: 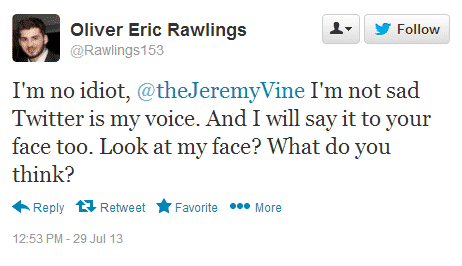 Following the @Rawlings153 attach the twitter use @Tug, real name John Wilson offered up the address of the boy’s mom: 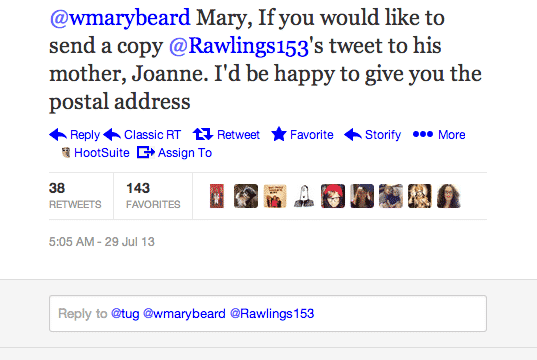 It turns out finding information about the Twitter troll was exceptionally easy since the genius tied his Twitter account to LinkedIn and various other public profiles that contained his address: 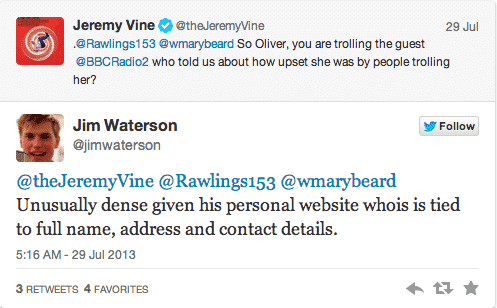 After everyone started trolling the Twitter troll the following message occurred: