After more than a year on the open market Facebook shares have finally returned to their IPO pricing.

Despite share prices over the last year Facebook has managed to fight its way back to $38 per share. In October Facebook stock hit an all-time low of $17.55. At the time Facebook CEO Mark Zuckerberg called the company’s mobile advertising problems a myth and promises the company was “just getting started” with its mobile push.

In an investor note on Wednesday Brian Wieser, a senior analyst at Pivotal Research Group, wrote:

“The results should put to rest many of the concerns that so many investors have had since the IPO, broadening the stock’s investor base … Fretting about Facebook as the next MySpace will probably go the way of MySpace.”

In the last week Facebook shares have increased by 40% while adding $25 billion to the social networks market cap.

Facebook still has a long way to go before it hits its opening day trading high of $45 per share but it definitely appears headed in the right direction.

Use the stock chart below to witness Facebook’s crazy price per share ride over the last year: 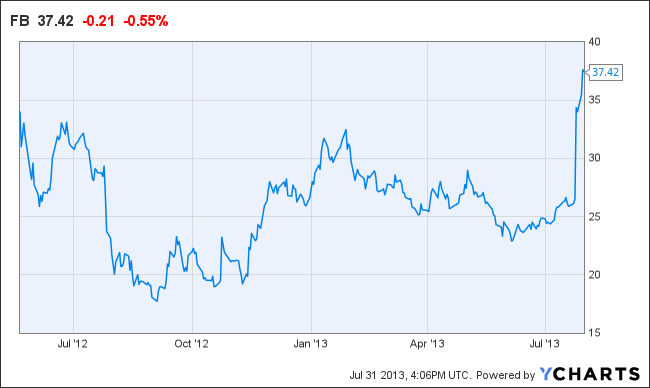