Whoever is in charge of ABC Chicago’s Facebook page apparently though it’d be a great idea to use Spain’s devastating train crash to generate some “likes.”

They posted a photo of the derailed train, asking people to “like” in order to “send thoughts and prayers to the victims.”

As you can see from some of the comments, ABC Chicago realized that the post was in poor taste and pulled it down, but screencaps still wound up on Reddit where the mocking continues.

Spain’s train derailment happened on Wednesday just outside of Santiago de Compostela. It killed 78 people and injured 140. You can watch video of the dramatic scene below.

Before removal, ABC Chicago picked up 879 “likes” on their post. They didn’t offer any sort of apology for the post, but whoever is running the affiliate’s Facebook seemed ready to move past it already:

Sadly, media publications exploiting tragedy to boost their social circulation is not that uncommon. 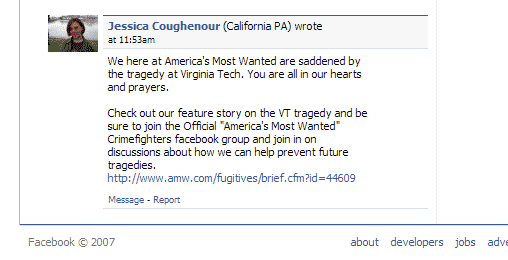 It’s one thing to report the news and another to cross-promote various social accounts. But if you see anything on social where a media outlet is asking for “likes” or “follows” with a sad story, take some screencaps and drop us a line.

What do you think of ABC Chicago’s exploitation of the Spain derailment?