You might have seen a heartwarming tale about a pastor who pretended to be homeless in order to teach his new congregation an object lesson about humility, service and the love of Jesus Christ making rounds on Facebook this week.

We hate to break it to you, but the story is probably not true.

A post making rounds on social media and various religious blogs this week tells the powerful story of Pastor Jeremiah Steepek, who became the new pastor of an unnamed 10,000-member church.

The story says that he showed up on his first Sunday dressed as a homeless man. He was ignored or shunned by snobby Christians and forced to sit in the back of the church by the ushers. When he was called to the stage for his introduction, his new flock was stunned when the homeless man sitting in the back row took to the pulpit.

The homeless pastor then schooled his new congregation, urging them to treat the poor, unfortunate and homeless like, you know, their God tells them to.

It’s a great story. But is it true?

Trusted hoax-debunkers at Snopes and Hoax-Slayer can’t say for sure, but there are many things about the post that just don’t add up. Snopes pointed out that the anecdote actually might be a combination of several others that have circulated before.

Hoax-Slayer simply pointed out that this photo: 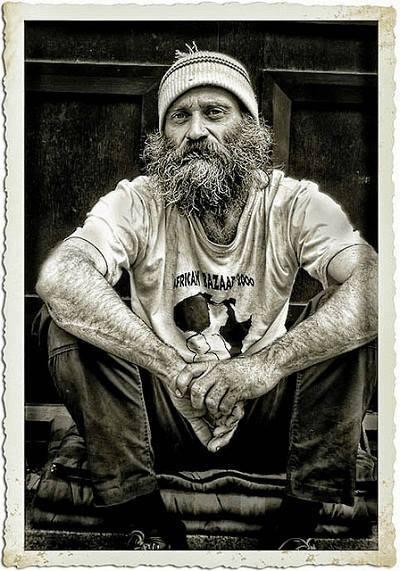 … is actually of an English homeless man taken by photographer Brad Gerrard. It’s all over Tumblr.

The Examiner, The Blaze and The Huffington Post all performed their own investigations and were unable to turn up anyone who was in attendance at the 10,000+ member church to verify the story. Pastor Jeremiah Steepek himself? A mystery.

A few Facebook pages apparently inspired by the story have been created, with one user adopting the name Jeremiah Steepek as a nom de guerre to bring awareness to issues of poverty and inspire action.

That page’s user calls the viral homeless pastor story a “parable,” and shared this real-life tale of a Tennessee pastor who lived as a homeless man prior to his appointment at Sango United Methodist Church.

Snopes also cited the story as a possible source of the parable.

So if you see the homeless pastor story being passed around on Facebook, remember that most viral posts of any nature or subject are usually only half true at best, and sometimes completely false. I encourage you to be honest with your followers about this story before you share it.