This quirky poultry anomaly was discovered by Twitter user @liiindseyyy412 (account is now private) and shared on the social network this week. Like this sort of thing is wont to do, it went viral pretty quickly. 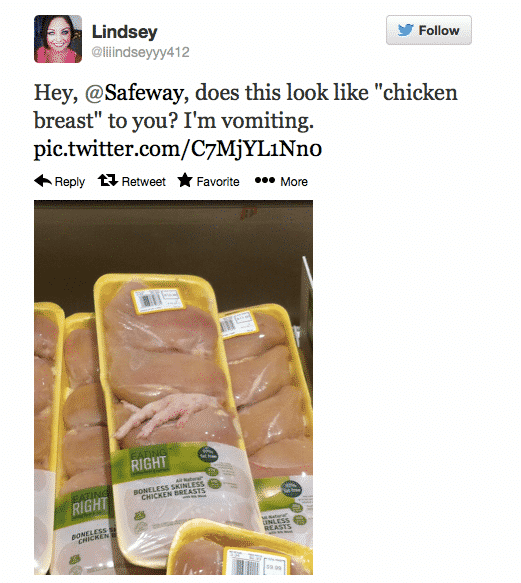 @liiindseyyy412 we are so sorry! Which location was this at?! #yikes #heretohelp

Anyway, this tweet really got away from Lindsey (hence the now-private account), but she was good enough to provide NewsBreaker with a statement. She said:

“I came across it when I was shopping for dinner at Safeway. My initial reaction was shock, of course, and I couldn’t believe what I was seeing. It was disgusting.

“I tweeted the picture to Safeway and they responded almost immediately asking what Safeway store it was, and said they were going to contact the store immediately. I contacted the manager when I went back shortly after to see if it was still there, and because it was, I went to the customer service desk for the manager. The woman there said he was busy on the floor, asked what she could do to help. I told her what I saw and left the store. The woman asked me which part of the meat section it was located in so they could find it.

“I asked the man near me to look at it and agreed that it was disgusting. The location of the store is at the corner of Happy Valley Rd and 39th Ave. in Phoenix, AZ.”

The chicken foot Safeway photo seems like it’d be viral gold, but it elicited a most interesting response on Twitter. Most people are actually flaming Lindsey (also, perhaps, hence the private account) and some have even questioned her motives.

@liiindseyyy412 freaks out when she sees chicken parts in her chicken!

@liiindseyyy412 Shocked to find out chicken breasts are made from chickens? Don’t look into what a hot-dog is. https://t.co/v0v96h5fqV — Joshuah Kusnerz (@Kusnerz) July 25, 2013

Lol’ing at attempted @Safeway extortion by @liiindseyyy412 … This is similar to @Yelp and @TripAdvisor extortion @Bosteve — Steven Lambert (@FunnelDog) July 25, 2013

@Safeway @liiindseyyy412 At least she didn’t find a horse hoof in the hamburger meat. Glad you use real chickens SW. Ill still shop there

Haha @liiindseyyy412 had such a dumb freak out on @Safeway yesterday. Chicken parts in chicken breast? The horror! And extortion? Grow up!

and the award for Idiot of Year goes to……. @liiindseyyy412

Gawker didn’t pull any punches, either. Under the headline “Safeway Shopper Horrified to Find Piece of Chicken in Her Chicken,” Neetzan Zimmerman wrote “Safeway reached out to Lindsey to say they would take care of it, but hopefully they don’t.”

Indeed, Lindsey did seem pretty amped about being on the 6 o’clock: 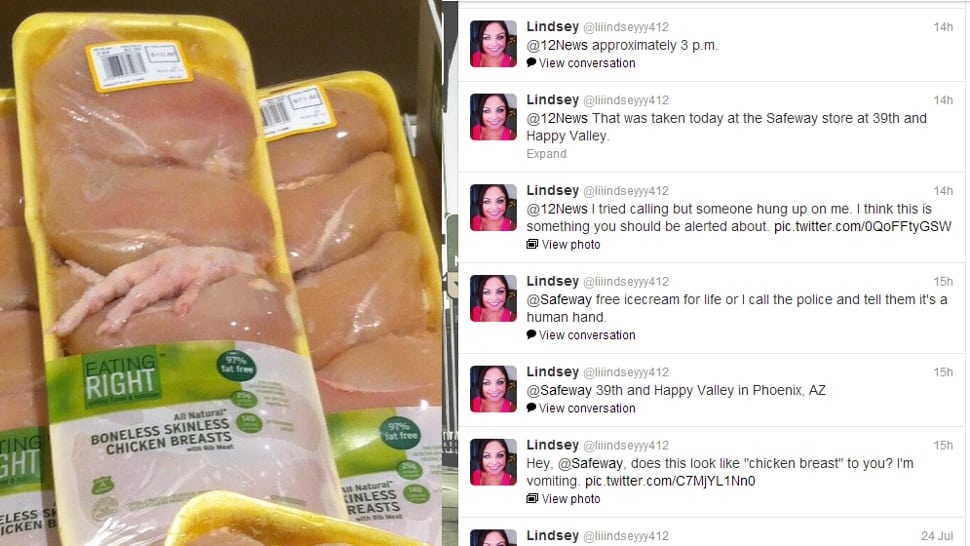 Just not really a lot of love for Lindsey out there right now.

You just really never know how the Internet is going to take things, but they generally draw the line at famewhoring. We’d love to actually talk to you Lindsey, but your account is set to private.

What do you think of the chicken foot Safeway “controversy?”